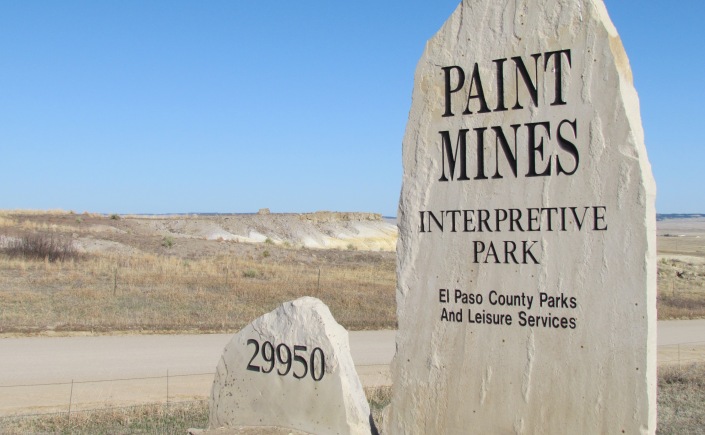 Getting out of Colorado Springs is the greatest challenge of our day. At seven o’clock in the morning, the traffic is already maddening. Luckily for us, a Western Meadowlark’s cheerful song emerges above the noise of the cars and instantly puts us in a better mood. It is an emblematic bird of the prairie which surrounds us as soon as we turn onto Highway 24. For the second year in succession, my husband and I travel 40 miles to our destination near Calhan, on occasion of my April birthday. This year our friend, Susanne, here on a whirlwind visit from Germany, accompanies us to the eastern reaches of El Paso County where the fantastic geology of the Paint Mines greets us amid the undulating landscape of Colorado’s High Plains. The tooth of time has gnawed spires, cones, and further fanciful forms out of the clay which constitutes the chief component of the mines. Their colors range from a near-blinding white to ocher and pink, but constantly vary as a result of the prevailing light.

Our guest in front of the Paint Mines. We really enjoyed your visit, Susanne!

The flora, still attired in muted beige and ruddy winter tones is punctuated by perennially green yuccas, but nascent wildflowers and verdant grasses suggest vernal awakening, despite a few remnants of snow that survive in shaded crevices.

Four to five miles of hiking trails afford far-off and close-up views of the Paint Mines. The perceivable shades and shapes are limited only by our imagination. From a distance, the structures appear like solid rock, but to touch they are friable, and leave a chalky residue on our fingers. The area has attracted humans for at least 9,000 years. Indigenous North Americans hunted for prey and multi-hued clays for pottery, ceremonial paint, and additional purposes. In the late 1800s, settlers of European ancestry fashioned bricks from the natural building substrate. 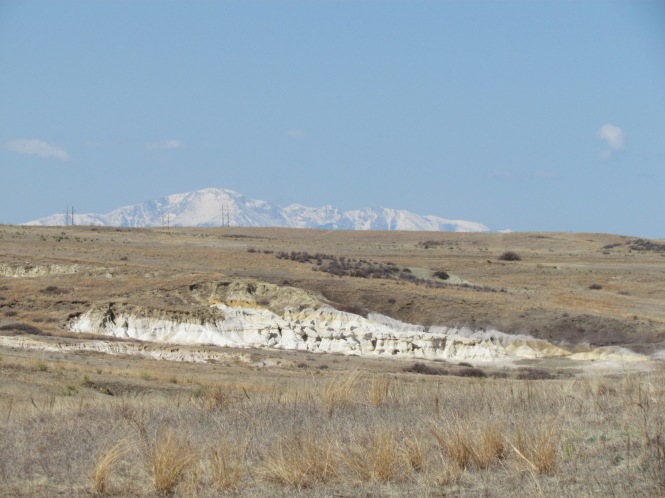 Paint Mines with Pikes Peak in the background

Whenever I am here, I imagine the transformation of the panorama in the intervening millennia. Pikes Peak looms on the western horizon as it has since times immemorial, but roads and houses are relatively recent introductions, and the forest of modern-day windmills near the Paint Mines is the latest, and most controversial addition: at best affecting the scenery, at worst the health of residents, and the survival of birds.

On this mid-week morning, we share the space with few other humans, but enjoy the furred and feathered fauna. Cottontails and jackrabbits disperse at our approach, then stop and eye us from a safe distance. A Thirteen-striped Ground Squirrel makes an unexpected appearance, its coat bearing a prominent pattern. 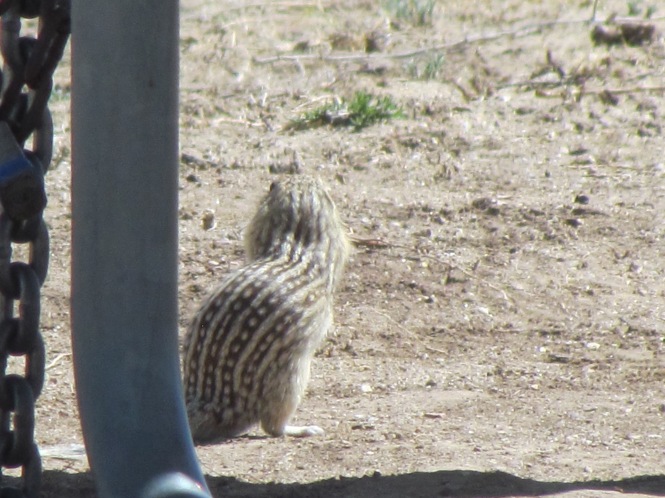 We see pronghorn and deer, but foxes and coyotes remain hidden, as do reptiles, especially the rattling kind, much to our relief. Many winged beings call this place home, year-round or temporarily. Rock Wrens’ melodies reverberate in the maze of the mines, Northern Mockingbirds impress with their repertoire, and the fluting of Western Meadowlarks continues to delight.

The squawking, tweeting, and chattering sounds surrounding us confirm that many creatures conduct their lives in this seemingly sparse environment.

One of the most iconic structures

Taking our leave, we carry away indelible impressions of the whimsical, vibrant formations, and of its denizens, and we feel connected to visitors throughout the ages who were similarly charmed and captivated by the Paint Mines.

8 thoughts on “A World in Pastel”