Out-of-town visitors to Colorado Springs regularly think of the present-day Hollywood actress when Helen Hunt’s name comes up during my tours as a volunteer docent at the Pioneers Museum. Both share a name and a relationship to California, but Helen Hunt, the First (1830-1885), was a pioneering woman and writer during our town’s infancy, in the latter half of the 19th century. Her initial impressions were inauspicious. “I shall never forget my sudden sense of hopeless disappointment at the moment when I first looked on the town. There stretched before me, to the east, a bleak, bare, unrelieved desolate plain. There rose behind me, to the west, a dark range of mountains, snow-topped, rocky-walled, stern, cruel, relentless. Between lay the town-small, straight, new, treeless. One might die of such a place alone.” No chamber of commerce would advertise these words on its banner. It is ironic that Colorado Springs did, in time, pride itself of the person who expressed them and name the popular waterfalls in North Cheyenne Cañon after her.

Helen Hunt, née Fiske, was 43 years old in November 1873 when she suffered these somber sensations after a cross-country train journey across the flat, monochromatic Great Plains from her home in Massachusetts to Colorado. Knowing about her past life, they are understandable. Motherless since age 13, fatherless since 16, she had lost her 11 month-old son Murray at 23, her 42 year-old husband Edward B. Hunt when she was 32, and her nine year-old son Warren at 34. Ill at heart and ill in body, she came at the behest of her physician, who recommended a change of scenery for a chronic respiratory condition. Before the antibiotic era, Colorado, by virtue of its healthy climate, was among the premiere destinations for health seekers suffering from consumption. During a period of frequent misdiagnosis, Helen might have been afflicted by tuberculosis, but officially it was asthma.

Fortunately for the burgeoning community at the foot of Pikes Peak, founded only two years prior, the dry air of the mountains did, indeed, benefit her health, while their beauty lifted her spirits. Helen decided to stay, after a complete reversal of her earlier attitude. In an essay about her new home in the New York Independent in August 1874, less than a year after her arrival, she reflected, “To-day I say, one could almost live on such a place alone.” “Almost” because she continued to love and pursue travel.

While mourning in Massachusetts, Helen Hunt had started to compose and publish poetry. Once she voyaged abroad, travelogues ensued. Her circle of friends in New England included Ralph Waldo Emerson, Harriet Beecher Stowe, and Emily Dickinson. Helen encouraged Emily to publish  her poems – but she only a allowed a few to appear anonymously during her lifetime, while the bulk of her prolific rhymes were published posthumously. Once settled in Colorado, Helen added novelist to her résumé. She belonged to an elite group of women authors able to make a living from their craft.

Colorado Springs, designed on a drawing board and in an early state of growth, did not yet offer many accommodations. Helen resided at the Colorado Springs Hotel, the settlement’s earliest, where she met fellow boarder William Sharpless Jackson. He was secretary and treasurer of the Denver and Rio Grande Railroad which, like Colorado Springs, had been founded by General William Jackson Palmer. Helen and Mr. Jackson’s friendship led to marriage in 1875.

Four years later, a lecture by Ponca Chief Standing Bear altered the course of Helen’s few remaining years. She researched the mistreatment of the Indians and became an outraged and outspoken activist on their behalf. In 1881, she distributed her critical treatise, A Century of Dishonor, to members of Congress. Though it remained largely unnoticed, it led to an assignment by Century Magazine to explore the situation of the Indians of the former Spanish missions in Southern California. She subsequently managed to have herself appointed a special agent by the Commissioner for Indian Affairs, and described the Indians’ pitiable living conditions and prospects. Her experiences also moved her to fictionalize their predicament. In a May 2, 1883 letter to the editor of the Atlantic Monthly she articulated her ambitions thus, “If I could write a story that would do for the Indians a thousandth part what Uncle Tom’s Cabin did for the Negro, I would be thankful for the rest of my life.”

In her novel Ramona, feverishly written in four months, and published in 1884, she conveyed her indignation. A tragedy about the ill-fated love between an American Indian man and a mixed-race Indian-Scottish woman, raised as an orphan by a family of Spanish-Mexican heritage, it delves into the racial prejudices and abuses suffered by the Indians of the Catholic missions in the former Mexican territory of California which was ceded to the United States after the Mexican-American War (1846-1848).

While the extent to which Helen Hunt’s reporting effected Indian policy reforms has been difficult to quantify, her novel Ramona became a literary bestseller. It has been in print since 1884, adapted for multiple film versions, and, since 1923, performed annually as a drama at the Ramona Pageant in Hemet, California.

Sadly, Helen’s death soon followed the birth of her masterpiece. I sincerely hope that the sale of more than 15,000 copies in the 10 months between its publication and her passing, was gratifying to her. True to her convictions till the end, she beseeched President Grover Cleveland to correct the wrongs inflicted on the Indians from her deathbed in California, where she was trying to recuperate. On August 2, 1885, she succumbed to presumptive stomach cancer at only 54, with William by her side.

Helen loved Cheyenne Mountain in Colorado Springs so much that her husband had remodeled their house to enable her to view it from her chambers. Now he honored her wish and buried her in the mountain’s shadow, at Inspiration Point near Seven Falls, already a tourist attraction in her days. She lay interred under a growing mound of rocks, lovingly placed by the hands of her many fans who pilgrimaged to the site. 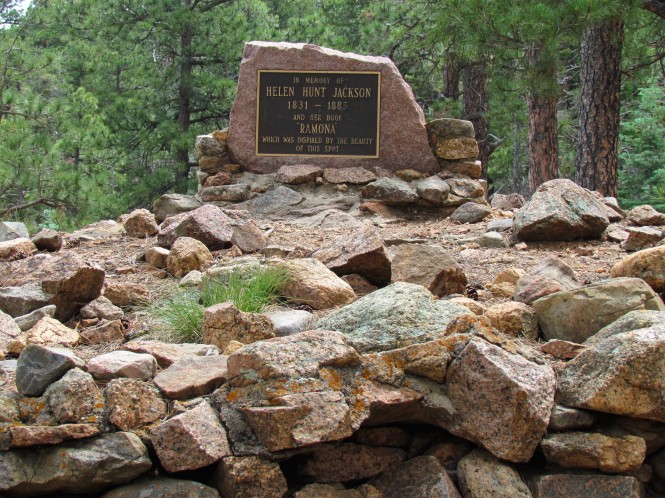 Eventually, she was relocated to the Jackson family plot at Evergreen Cemetery. It is consoling for her acolytes to know that her grave is the one closest to, and with a direct view of the mountain she so cherished.

Helen Hunt’s resting place at Evergreen Cemetery, with a view of Cheyenne Mountain

When the city acquired the Jackson property in 1961 and the house was slated for demolition, the family donated portions of her domicile to the Colorado Springs Pioneers Museum, which showcases four of Helen’s original rooms and furnishings in a permanent exhibition.

Helen Hunt Jackson occupies a special place among the early citizens of Colorado Springs. Her indomitable spirit allowed her to overcome one blow of fate after another, and her American Indian activism was unusual for a woman of her era and social standing. In our local historic universe, she shines as one of the brightest stars.

Helen Hunt’s portrait came from a photograph I took of a postcard issued by the Pikes Peak Library District. Photographer and date unknown.

12 thoughts on “The Original Helen Hunt”