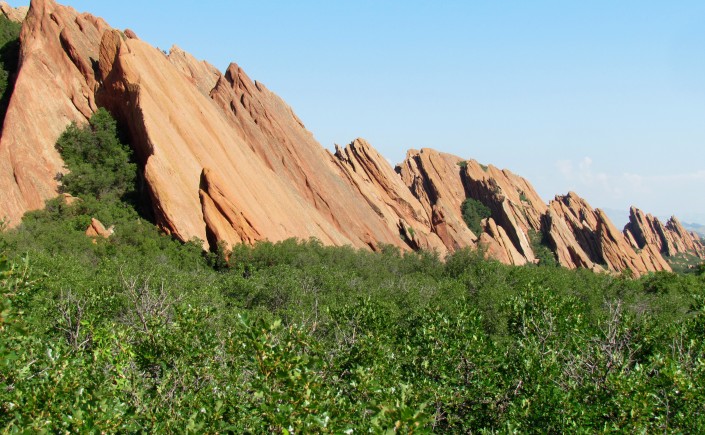 Ever since my inadvertent discovery of Colorado’s Roxborough State Park more than five years ago, I have harbored the wish to introduce it to my husband. Its location near Denver, about 65 miles north of Colorado Springs, had been a slight deterrent because of the attendant drive and traffic, but we finally made the journey in mid-July.

Visitor Center, built to blend into the setting

A Tranquil and Treasured Place 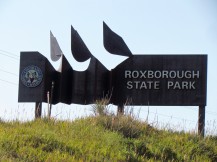 We are enthusiastic devotees of Colorado’s State Parks and, for years, have happily invested the $70 fee for an annual pass that allows access to all forty-two parks, save one. A mere ten visits per year amortize the investment, and we typically far exceed that number. As the parks are scattered throughout the state, those that remain to be explored outnumber the ones we are familiar with, among them our nearby favorites, Cheyenne Mountain and Castlewood Canyon.

Roxborough State Park, fringed by the plains in the east and the Rocky Mountain foothills in the west, is one of the least developed parks. It is open only during daytime, does not offer picnic or camping facilities, and only allows human foot traffic. If this sounds restrictive, it is done in the noble attempt to limit visitation and minimize impact on its fauna, which includes 181 recorded bird species, plus multiple mammals, among them deer, elk, fox, black bears, bobcats, and mountain lions. When I recently published a post about our rare encounter with a rattlesnake, little did I know that soon afterward, we would run into another – at Roxborough. Again, this individual was not aggressive, and slithered away into the tall grass lining the trail. Shortly thereafter, we nearly stepped on another snake, and were jolted to attention when it hissed and curled. Fortunately, the bullsnake, albeit of impressive size, is not poisonous, and merely wanted to alert us of its presence.

Long-tailed Weasel. Photograph of a sketch (not mine), as I was unable to get a photo of the one we saw.

The ubiquitous Spotted Towhee. We saw many, but I substituted a better photo from another location.

Roxborough’s most outstanding features are geologic. Slanting red sandstone slabs form several parallel ridges along the park’s north-south axis, like the spinal columns of so many slumbering dinosaurs. The rocks are representative of the Fountain Formation. These oblique rubicund walls are even more remarkable when one comprehends that they originated as the bottom of an ancient inland ocean before its uplift some 300 million years ago. This is where my comprehension ends. As much as I hate to admit it, my geologic grasp is miniscule. Each time I read about rocks and minerals and millions and billions of years, my eyes glaze over, despite repeated attempts to remedy my ignorance. Ignorance does not equal inattention or inappreciation, but not everybody can be a rock hound. 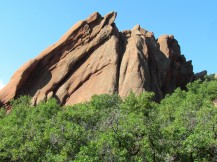 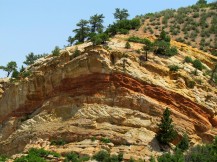 Contrasting and complementing verdure, stimulated by several streams, creates a far lusher appearance than we are accustomed to from the otherwise geologically similar Garden of the Gods in Colorado Springs. The versatile flora comprises tallgrass species and wildflowers, but our nearly decade-long regional drought has temporarily suppressed the number of flowering plants. The entire American West hopes for more summer rains. 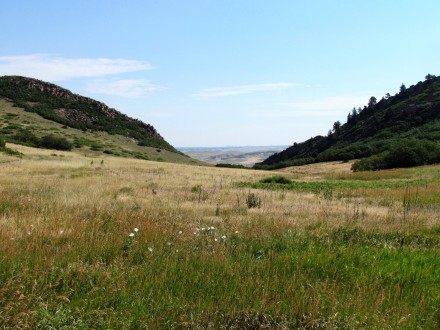 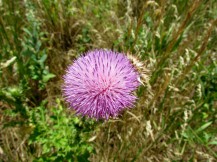 This exquisite jewel of a refuge has attracted humans for eons. Evidence of local activity dates back nearly 12,000 years, and those Paleo-Indians were followed more recently by Utes, and, to a lesser extent, by Arapahoe. The locale owes its name to Henry Persse, a New York transplant. In 1903, he built a stone house on the north end of the valley, originally called Washington Park, before he rechristened it after an ancestral Scottish location. He intended to transform the area around his summer home into a resort, replete with hotel, golf course, and guest cottages. Mercifully, this plan never materialized, and his and some surrounding property amounting to a total of about 3,300 acres came into the possession of the state of Colorado, and was opened as a park in 1987. 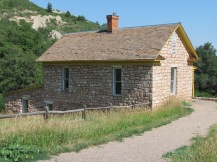 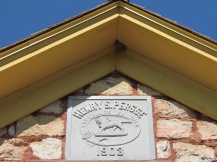 Despite its proximity to the greater Denver metropolitan area with its three-plus million inhabitants, and despite the doubling of the annual visitation from 75 to 150 thousand in the last four years, when managing to avoid weekends and holidays, it is still possible to experience transformative tranquil time at this treasure trove.

49 thoughts on “A Tranquil and Treasured Place”