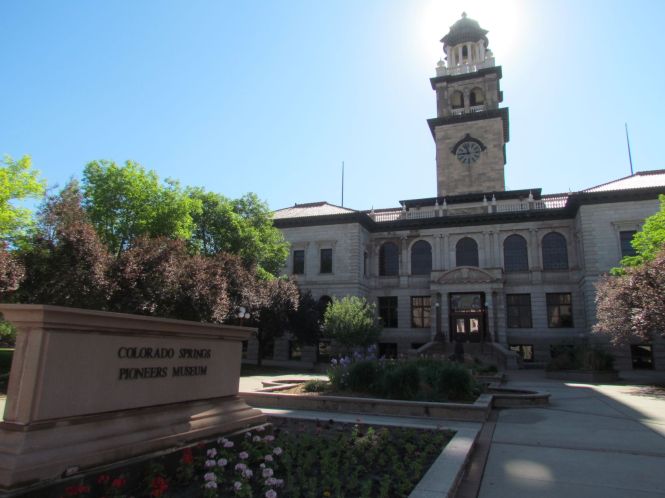 West side of the building with entrance, July 2020.

Welcome to the Colorado Springs Pioneers Museum. Allow me to introduce to you one of my favorite home-grown institutions, where I have happily served as a volunteer docent for over five years.

Our local history museum is located in the former El Paso County courthouse. The building was commissioned in 1899 and completed in 1903, then served as the county courthouse until the early 1970s. It was clearly built to last, but very nearly fell victim to urban renewal during the 1960s and -70s. If it weren’t for a group of engaged (and enraged) citizens, this gem would have been reduced to rubble, like other iconic downtown Colorado Springs structures.

The museum relocated from its previous, far smaller quarters into these more spacious surroundings, and reopened its doors in 1979. The building not only houses myriad fascinating artifacts, but represents the most elaborate showpiece of the entire collection. Though few people today fail to be impressed by its commanding presence, it has not always enjoyed favorable sentiments. Rather, it was embroiled in a series of controversies from the start.

Similar angle in February 2018. What a difference 8 months can make!

Situated in the middle of Alamo Square Park, the site was originally known as South Park and was the counterpoint to North Park (present-day Acacia Park) several city blocks north. Against the wishes of many lawyers, who would have preferred their future work place nearer their elegant homes in what is now called The Old North End neighborhood, the more southern location was chosen. Local residents protested the felling of trees from South Park, which had been painstakingly planted and raised. And, to add fuel to the fire, the appointment of the architect, Augustus J. Smith, with his what some considered an inadequate résumé, ruffled feathers among the architectural establishment, who were aghast that an outsider would get credit for what promised to be a prestigious project. But no gnashing of teeth or maligning resulted in the reversal of the county commissioners’ choice, and Augustus immortalized himself by erecting the 9th incarnation of the El Paso County courthouse in the then-popular Italian Renaissance Revival style, modeled after imposing Renaissance residences in Italy.

Characterized by flat or low-pitched roofs, wide eaves, central cupolas, vertical and arched windows, the design of the courthouse also pays homage to Greek antiquity by incorporating, in order of increasing complexity, Doric, Ionic, and Corinthian columns. This classification is based on the elaborateness of the columns’ capitals (or crowns), not the shafts. While the building base is solid and square and adorned with sturdy Doric columns, the architecture becomes more detailed and elaborate before culminating in Corinthian columns in the seemingly central clock tower. Not unlike a wedding cake, to which it has been compared, its most eye-catching features adorn the top.

To honor its rootedness in the American West, the edifice incorporates Manitou Springs green sandstone in its foundation, and Platte Canyon granite and lava rock in its walls, materials all quarried in Colorado. The ornate if not slightly ostentatious enterprise came at a cost, but $420,000 seemed an appropriate price to pay for the then 30-year-old community of Colorado Springs. By the turn of the 20th century, not only did it enjoy a growing reputation as a health resort for sufferers of tuberculosis, it also benefitted from the river of gold flowing down the slopes of Pikes Peak, where the precious metal had been discovered in 1891.

View from the northwest corner with reflection in the adjacent building, July 2019.

In case you are surprised at the opulence you see before you, a recent article in our newspaper suggested that of all the historic courthouses in Colorado’s 64 counties, our local El Paso County example is by no means the most lavish or luxurious (though it might afford the most stupendous view).

April 2016. Westard view from the clock tower, showing the Front Range with Pikes Peak in the distance, and in the foreground, the 10th El Paso County courthouse, successor to its much more attractive antecedent.

If you enjoyed today’s tour, which highlighted some of the building’s history and exterior, I hope you will join me again one week hence, when I will give you a glimpse of the museum’s interior treasures.

27 thoughts on “Welcome to the Colorado Springs Pioneers Museum”