During our May visit, we saw a few baby animals, but when the zoo’s July newsletter informed me of additional births, some of them unforeseen, I scheduled a return trip. I had three goals that morning of my visit, and much to my delight, all were met.

We had caught a glimpse of one-month-old Ring-tailed Lemur baby, “Maky,” clinging to her mother, “Rogue,” in May, but the lemur family had since grown. The male lemur, “Hercules,” had also connected with another female, “Allagash,” who gave birth on July 11 to not one, but two babies–twins! They were only two weeks old when I met them, and if you look closely, you might detect one of them in the featured photo above, as well as in the first of the three following photos. You should see them both in the third photo.

To enlarge a photo, click on it. To read its caption, hover your cursor over it. 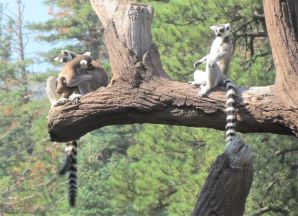 Allagash with one of her twins visible, and two other adult lemurs

Rogue with Maky clinging to her back, with one additional adult

Allagash with both her twins

Occasionally, one hears about a pregnancy that goes unnoticed, and this phenomenon is not limited to humans. To say that hippos are hefty animals is no lie. It’s not difficult to imagine that a baby bump might go unnoticed. When the keepers of the Nile hippos at the Cheyenne Mountain Zoo noticed restless behavior in one of the females, “Zambesi,” she didn’t keep them in suspense for long, and, on July 21, gave birth to a baby boy. Zambesi and the male adult hippo, “Biko” had hit if off when they first met last fall, but nobody knew if their romantic hippo trysts had led to the desired result. I was thrilled to catch a few brief glimpses of the yet-unnamed infant as he surfaced next to his mother in between periods of rest.

Zambesi with her son 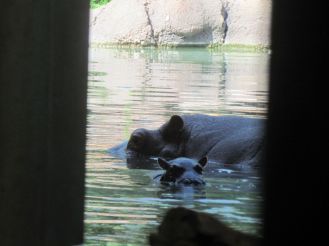 Zambesi with her son

At my third stop, “Gidgee,” the Red-necked Wallaby, was hanging out on the grass of her enclosure. We knew about the joey in her pouch in May, but at that point it was too young to emerge. About a week before my July visit, the zoo keepers had seen parts of the Gidgee’s son in the opening of the pouch. I was happy when he took a brief peek at the outside world while I was there. With a little imagination it’s possible to see his nose and one of his eyes in the second photo. The rapidly-growing boy has since left the pouch, but I haven’t yet made it back to the zoo for a follow-up photo.

With these endearing photos of our zoo’s latest baby animals, I will step away from the blog for a month or two and wish all of you good health and happy times.