It is a human trait to be attracted to beautiful natural locations, and Manitou Park in Teller County, north of Woodland Park, along Colorado Highway 67, is no exception. The broad mountain valley parallels Trout Creek, a tributary of the South Platte River, and is bounded in the east by the Rampart Range, and in the west by the West Creek Range.

We do not know if Native Americans hunted or camped there, but the availability of water and game suggests as much. What we do know is that it didn’t take the residents of newly-founded Colorado Springs long to discover it for themselves. It is likely that the trappers of the early 19th century, and the gold seekers following the 1858/59 Pikes Peak or Bust Gold Rush were familiar with the area, but our historical knowledge becomes detailed only after Dr. William Abraham Bell, personal friend and business partner of General William Jackson Palmer, and founder of Manitou Springs, purchased a tract of land in 1872. He christened it Manitou Park and likely considered it a complement to his town at the base of Ute Pass. In the ensuing years, he developed it into a resort where well-heeled travelers could recreate with fishing, hunting, bowling, golfing, even gambling. 1874 saw the first in a succession of three hotels which occupied the valley, each of which succumbed to the all-too-common fate of wooden structures during the early settlement years — that of being consumed in a conflagration. 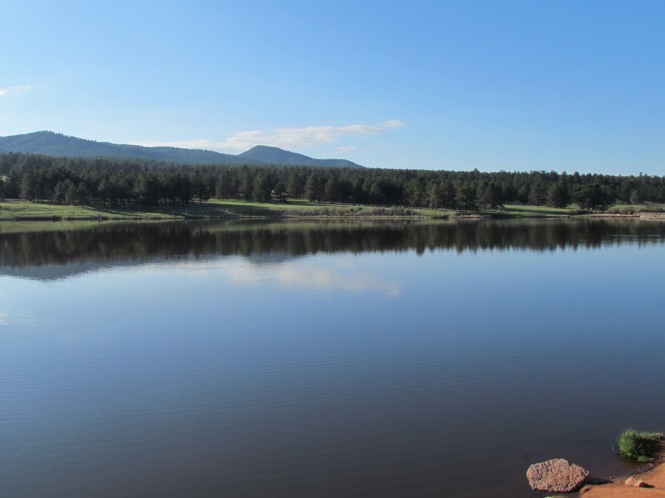 The Bell family eventually donated some of the property to Colorado College for a forestry program, but after its discontinuation, it came into the possession of the government. In combination with other private holdings and public lands, the Manitou Experimental Forest was founded in 1936. Initial efforts for the site focused on revegetating forests and rangeland which had been depleted by uncontrolled logging and grazing operations. Subsequent research emphasized fire management, meteorology, habitat and wildlife preservation. One fascinating field of study revolves around Flammulated Owls. Since the 1980s, Professor Brian Linkhart from Colorado College has dedicated his career to the examination of their migration, breeding, and nesting behavior, and has accumulated a wealth of knowledge about this elusive, diminutive owl species of western pine forests which overwinters in Mexico and spends summers in Colorado.

For the casual visitor, a trip to Manitou Lake Recreation Area is a pleasing way to experience a small portion of Manitou Park. A $6 entrance fee includes access to picnic tables, fishing (with a valid license), hiking, and nature observation. The setting is beyond picturesque. The astounding vistas of the north face of Pikes Peak alone would be worth a few hours of one’s time. Even though camping is no longer possible at Manitou Lake proper, several nearby Forest Service campgrounds are available whose fees include admission to the recreation site.

My visits to Manitou Lake have always centered on birding, and I have never been disappointed. What I remember best are flocks of white pelicans, a great blue heron rookery, waterfowl, warblers, flycatchers, jays, woodpeckers, hummingbirds, and myriad swallows, to mention only a few of the species which call this spot home, temporarily or otherwise. The wildflowers in the summer add color and texture to the canvas, and insect lovers will find many grasshoppers, damsel-, and dragonflies to boot.

I have only recently become more acquainted with Dr. Bell’s retreat in easy driving distance from Colorado Springs, and look forward to future excursions. Unlike him and his contemporaries, I won’t be playing golf, but like them, I will enjoy watching the canopy turn golden and Pikes Peak dress in white, while anticipating the return of spring.

One thought on “Dr. Bell’s Retreat”