In the Four Corners region of the United States, where Colorado, New Mexico, Arizona, and Utah meet and the Colorado Plateau dominates countryside and climate, the land is riddled with innumerable ruins. Ruins reminiscent of complex societies that eked out an existence in this semi-arid to arid high desert. Once formerly nomadic American Indian tribes settled, they fashioned permanent structures out of local rock and wood and plastered them with adobe fashioned from dirt and water, thereby transforming their habitations into edifices the color of the earth. They rang in what would later be called the Pueblo Period, spanning the centuries from 700 to 1300 AD.

Clusters of these pueblos lined canyon interiors and rims, or were nestled under overhangs, nearly all of them chosen for the proximity of a spring or seep that ensured a steady supply of water. Piñon pines, junipers, sagebrush, and the associated plant community furnished material for construction, firewood, clothing, and food.

Wild animals still supplemented their diet and dress, but their hunting and gathering lifestyle shifted to one relying heavily on agriculture which produced the southwestern holy trinity of foodstuffs: corn and beans and squash. An infinite sky with an unobstructed view of countless celestial constellations inspired purposefully placed petroglyphs that precisely pinpointed vernal and autumnal solstices and additional astronomical phenomena.

Petroglyphs (rock carvings, depicted here) and pictographs (rock drawings, not shown here) are the only “written” documentation of the Ancestral Puebloans

Who were these people, to parrot my husband’s deferential question. When modern-day observers first beheld their monumental settlements, they adopted the appellation Anasazi for their architects, from the Navajo language, meaning “ancient enemies” or “ancient foreigners”. According to early observers, they seemed to have vanished from the face of the earth. In recent decades, this view has been replaced by the theory that they dispersed into surrounding regions, and mingled with the ancestors of contemporary pueblo dwellers. Consequently, the term Anasazi was supplanted by the name Ancestral Puebloans. 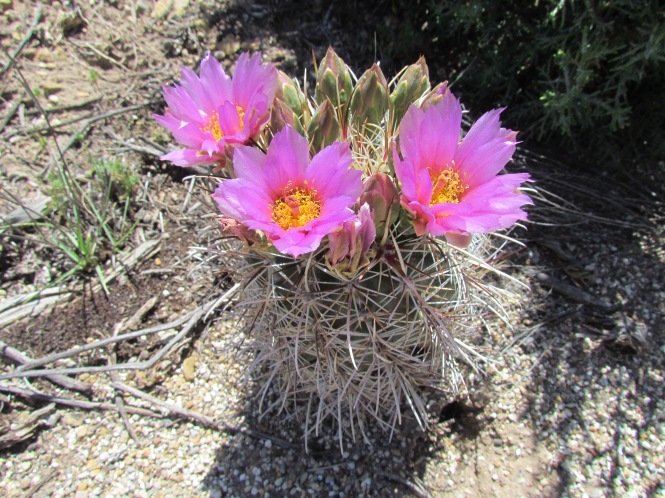 Cacti thrive in the arid climate…

Why did these rulers of remote reaches abandon their carefully constructed communities that had withstood the caprices of centuries? Nobody knows exactly, but theories abound. That water equals life rings true everywhere, but nowhere is this more evident than in an ecosystem which operates on the slimmest margin of moisture, where the presence of this essential element is indicated by scarce emerald ribbons winding through the pastels of the desert. Did they depart because of a paucity of this precious product, when one decade of drought succeeded another, as tree ring analysis suggests? Did overuse lead to depletion of the soil, to ensuing tensions, and to armed conflict over precious commodities? As one question is answered, another arises, and many remain.

Who were these Ancestral Puebloans?

This is part 1 of an evolving series.