This is part 3 of an evolving series.

Once Chaco Canyon lost its prominent role, due to natural or man-made causes, Mesa Verde saw its star shine brightly, before it, too, flickered, then faded. American Indians had lived on this part of the Colorado Plateau, which now lies in southwest Colorado, since the mid-500s, first on mesa tops in pit houses, then in aboveground stone constructions. From 1150 on, they built extensive pueblos in alcoves of reddish sandstone, the picturesque backdrop of the iconic images many of us envision when we think of Ancestral Puebloans. In fewer than one hundred years they departed. Here as elsewhere, the reasons are still debated. Historians often point to the defensive position of these pueblos in support of the theory that drought and famine led to warfare and, finally, to the dispersal of the clans.

Mesa Verde became a National Park in 1906 and a World Heritage Site in 1979. My husband and I explored it twice, in 2009 and 2011. When we drove past its entrance during a trip to the area in May of this year, we regretted not having time for a third foray. But we reminisced about former sojourns, following the road into the park in our mind’s eye. Soon after the turn-off from Colorado Highway 160, a spur reaches the main Visitor Center. Even if travelers are unable to explore the park in depth, a stopover here will give an overview of one of Colorado’s best-loved National Parks. At the four mile marker, the road passes the campground (open from mid-May until mid-October), before it slowly winds up to the top of the mesa with its superb views of the surrounding scenery. After 15 miles, the road branches into two. One leads to Chapin, the other to Wetherill Mesa.

Chapin Mesa is home to the Cliff Palace (featured image on top) and Balcony House, perhaps the best-known and most-photographed dwellings. Because of many years of pillaging, wanton destruction, and safety concerns, they are only accessible by ranger-led tours. Reservations are typically available for the same day. Self-guided tours are possible at Spruce Tree House. The Chapin Mesa Archeological Museum offers detailed information about the history of the Ancestral Puebloans. Nearby, remnants of earlier pit houses have been excavated. The impressive Sun Temple is thought to represent a ceremonial center, unfinished at the time the Mesa Verdeans left their habitations. Former check dams and reservoirs illustrate various ways to collect water. While this was indispensable for everyday purposes, farmers supposedly used dryland techniques, without artificial irrigation. 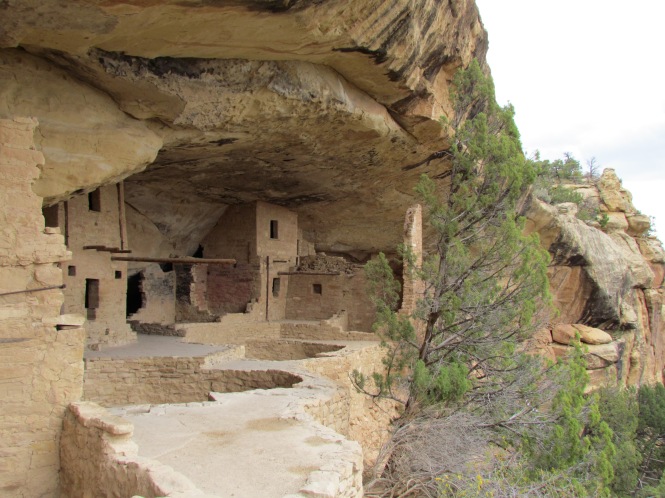 Kiva without a roof. A ceremonial chamber thought to represent the place of emergence of the people.

Kivas at Spruce Tree House with roofs and central openings, accessed with a ladder.

Wetherill Mesa is open only from May through September, weather permitting. Its major residences are Long House (ranger-led only), and Step House (self-guiding). This portion of the park is named after Richard Wetherill (1858-1910), a well-known if controversial figure in the annals of several ancient pueblos in the Four Corners region. Hailing from a Colorado ranching family, he is credited with the discovery of Cliff Palace. He seemed genuinely moved and inspired by those uncharted stone structures filled with daily implements, food, even human skeletons, but might have been at least partially responsible for their subsequent theft or sale to collectors and museums. Thus he may be considered the first in a line of pothunters who continue their misdeeds to this day. In 1901, he moved to Chaco Canyon and tried to establish a homestead on land surrounding the local ruins. When Chaco became a National Monument, he relinquished his claim, but continued to run a trading post there. He was shot in 1910 and is buried not far from Pueblo Bonito. 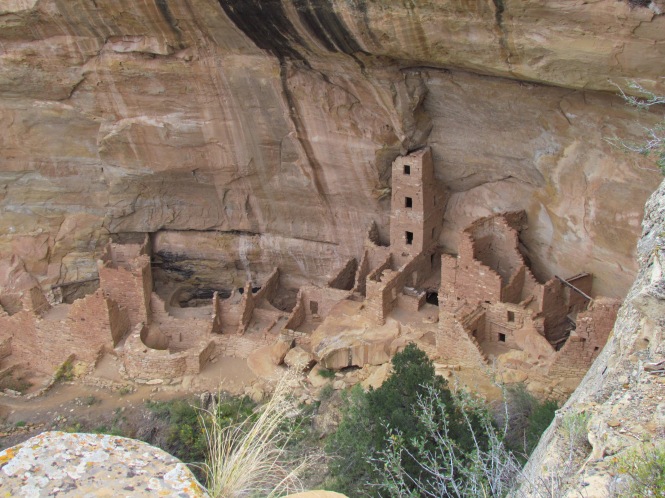 Mesa Verde was our first acquaintance with the design of the Ancestral Puebloans, and the elegant masonry nestled between two strata of sandstone left indelible impressions. Here, too, many pieces of the puzzle of this fascinating culture remain missing.

Who were these Ancestral Puebloans?