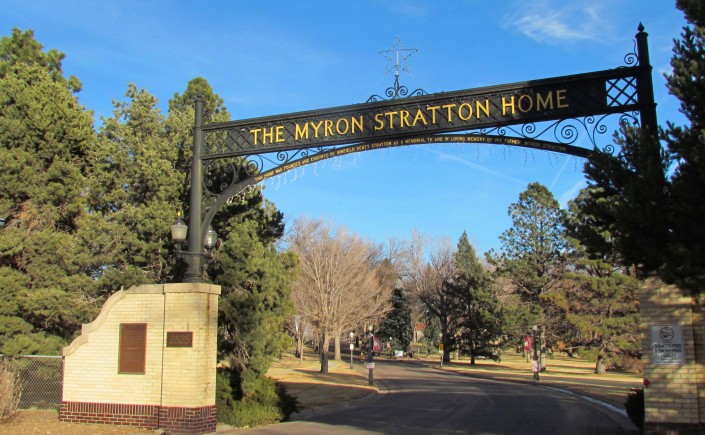 Soon after the founding of Colorado Springs in 1871, a young carpenter from Indiana moved to the bourgeoning town, attracted by the prospect of gainful employment – new home construction depended on woodworking skills. Wood was his professional life, but within a few years, precious metal filled his dreams. Starting in 1874, he took a yearly summer sabbatical and headed into the mountains to prospect for gold; in the ensuing years he attended college classes in assaying and metallurgy to better the chances at succeeding in his quest.

He had been too young for California’s gold rush of 1848/49, and for Colorado’s ten years later. The discovery of gold in the Cherry Creek area near the future site of Denver in 1858/59 had brought waves of hopefuls to Pikes Peak, but in those early years of exploitation, the region did not reveal its riches. Three decades later, the fortunes of Colorado Springs and many of its residents changed when veins of the shining ore were discovered on the southwest side of the mountain. After 1890, Victor and Cripple Creek arose from the rocky ground almost overnight and, ere long, tens of thousands of optimistic miners called these towns home.

One of the “fortunate” who possessed a claim was Winfield Scott Stratton (1848-1902), said carpenter – after 17 years of tireless exploration. His rich Independence Mine made him one of the richest citizens of Colorado Springs. Unlike other newly minted millionaires, he did not put on airs, or put up a new, ostentatious home for himself. Never forgetting his humble beginnings, he was content to live either in a small shack near his mine, or in relatively modest houses in Colorado Springs. And he was always willing to give to the needy.

Among his beneficiaries was Bob Womack. The old cowboy-turned-gold-seeker might have been the first to find gold in Cripple Creek, but he sold his claim for $500, did not benefit from the town’s bonanza, and remained poor to his end. Mr. Stratton also came to the rescue of the townspeople of Cripple Creek who suffered in the wake of a devastating fire in 1896, when he financed a train to haul necessities from Colorado Springs to the bereft victims. He developed the Colorado Springs & Interurban Railway Company, an electric trolley system that served the city, as well as an amusement park at one of the trolley’s terminals at the west end of town. He called it Cheyenne Park  but it was renamed Stratton Park after his death. Its bandstand was the location of a free concert each Sunday. He donated land for City Hall and the Post Office, financed the Mining Exchange Building, supported Colorado College and the Colorado School for the Deaf and the Blind. He gave away vast earnings in various philanthropic ventures, but when he sold his Independence Mine to an English company in 1900, he found himself with an additional 10 million dollars, the equivalent of about 240 million in today’s currency.

Money did not buy Mr. Stratton happiness. Once his quest for gold was fulfilled, life did not seem to hold many charms. It is said that he could not walk anywhere without being accosted by someone begging for money. The constant requests for slices of his pie were a heavy burden and the following words are ascribed to him: “Too much money is not good for any man. I have too much, and it’s not good for me. A hundred thousand dollars is as much money as the man of ordinary intelligence can take care of. Large wealth has been the ruin of many a young man.”

Always a recluse, he increasingly preferred a bottle to human company and died in 1902 of liver cirrhosis, at the age 54. A dozen women suddenly declared having been his lawfully wedded wives. He had married once, but the union had ended in divorce. His wife bore a son of questionable fatherhood, but now his purported offspring lay claim to his inheritance. Former mining partners remembered old promises. Aware of his approaching death, Mr. Stratton had willed vast sums to various individuals and institutions. But he had assigned the bulk of his capital to fund “a free home for poor persons who are without means of support and who are physically unable by reason of old age, youth, sickness or other infirmity to earn a livelihood.” It was to be named after his estranged father, Myron Stratton. 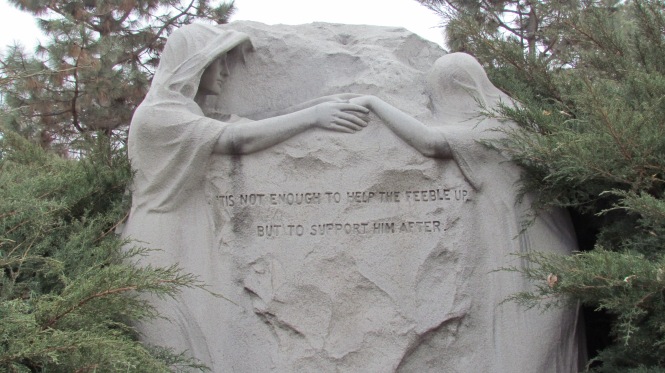 Back side of his gravestone

The uproar created by the opening of his testament could be heard across the country. It was contested by many, including real or imagined relatives, the city and even the state that went so far as to question his mental stability. In the end, after much frivolous litigation and many settlements, his steadfast trustees succeeded in having his wishes honored. With a 6 million dollar endowment, the Myron Stratton Home opened its doors in 1913. It has provided housing, education, and work to countless Colorado Springs residents, and continues to function as a home for seniors in need of assistance today. Many firsthand, inspirational accounts of individuals saved by this foundation speak to its enduring legacy. Winfield Scott Stratton might not have been content with his life’s work, but he would be overjoyed with the wide-reaching windfall his wealth created, for the greater good of mankind.

Mr. Stratton’s statue on the grounds of the Myron Stratton Home

26 thoughts on “A Quiet Champion”