What is in a name? Nomenclature does not necessarily follow the rules of logic. Common names of animals might or might not be related to scientific names, and might or might not be intuitive. Let’s explore the names of five different jays that occur in Colorado. Members of the corvid family (Corvidae), they are among the smartest birds, and, I think, among the most handsome and entertaining.

The Blue Jay (Cyanocitta cristata), is a recent resident of Colorado, having expanded its range from the eastern United States only in the last one to two decades. Cyanocitta cristata can be translated as blue-crested chattering bird (kyáneos: Greek for blue, kitta: Greek for chattering bird, crista: Latin for crest). Chattering is an understatement, as it often announces its presence unabashedly and vociferously, with a clarion call, though its extensive repertoire also includes a lovely fluting melody. It is a great vocal mimic and seems to particularly enjoy posing as a Red-tailed Hawk, confusing other birds and birders. Its name is somewhat unfortunate, as there are a number of blue jays that are not Blue Jays.

The Steller’s Jay (Cyanocitta stelleri ) is dressed in darker shades of blue and black, and was first described by German naturalist Georg Wilhelm Steller (1709-1746), after whom the Steller’s Sea Cow and Steller’s Sea Eagle were also named. It, too, has a crest, which is more conspicuous than the Blue Jay’s, so I think that Cyanocitta cristata would be a more apt appellation than Cyanocitta stelleri, but I am afraid that I am a few centuries too late to submit a proposal to the naming committee.

The Woodhouse’s Scrub Jay (Aphelocoma woodhouseii), also clad in blue, is a resident of dry scrub oak-juniper habitat. It was designated a separate species from the California Scrub Jay and the Island Scrub Jay only in 2016, all three of them having formerly been lumped together as Western Scrub Jays. Its scientific name pays tribute to Samuel Washington Woodhouse (1821-1904), American surgeon, explorer, and naturalist, and emphasizes the fact that it has simple hair, or simple feathers (in Greek, apheles means simple, and coma hair), because their feathers lack stripes or bands. 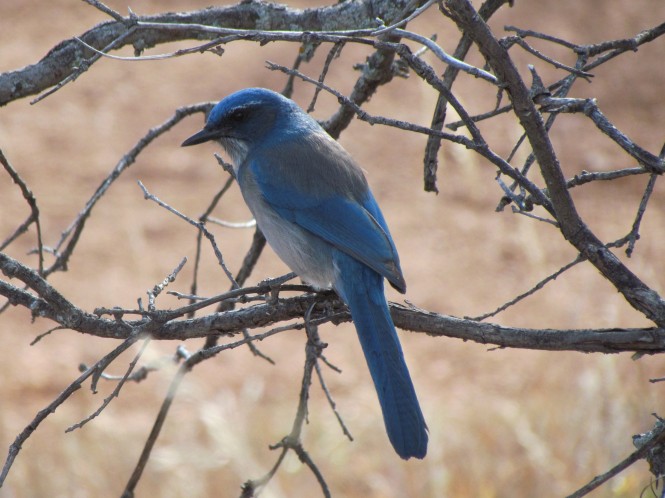 Completing the Colorado blue quartet, the Pinyon Jay (Gymnorhinus cyanocephalus) loves pinyon pine forests, and is the most gregarious among the bunch, occurring predominantly in noisy flocks. Its scientific name should trigger some neurons. We already know that kyaneos means blue in Greek, and can derive that kephalus means head, from words like encephalitis (an inflammation of the encephalon: the organ inside the head). Gymnorhinus tells us that it has a naked nose (gymnós: Greek for naked, rhinus: Greek for nose), as the base of its beak is featherless. This makes it singularly suited to probe pine cones heavy with pitch, which would mess up the feathers present on the beaks of other jays.

Last, but not least: the Canada Jay. Not blue! After being known as Gray Jay for many years, despite its scientific name Perisoreus canadensis, its common name was brought in line only in the summer of 2018. Other fun designations hint at its rascally behavior and include Whisky Jack and, very aptly, camp robber. No sooner do we stop for a picnic in the mountains than a few appear like gray ghosts seemingly out of nowhere. They are known to rummage through camps in search of edibles. The genus name is likely derived from the Greek perisōreuō (to bury underneath, or to heap up), and highlights the fact that they cache their food, which helps them survive the harsh winter months in their year-round high-elevation or northern boreal forest habitats, where they also lay eggs in freezing temperatures. 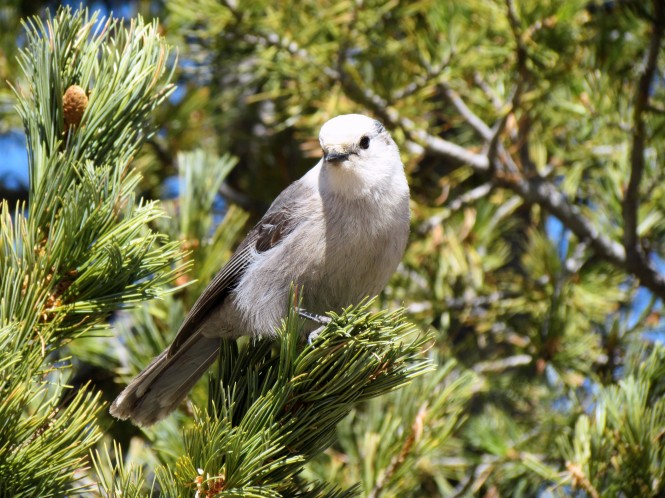 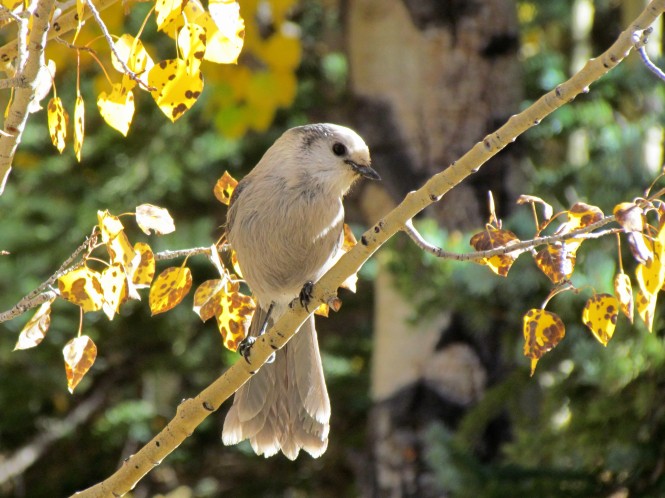 Blue or gray, flat-headed or topped with a crown, shy or companionable, I love all our jays and delight in observing them at the feeder, or out in the wild.