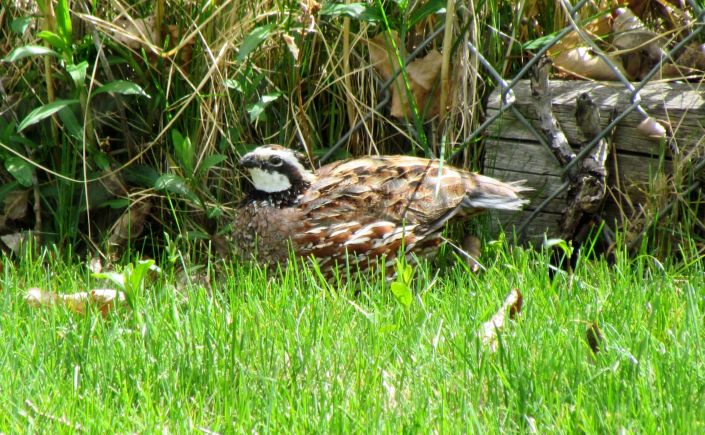 One lovely May afternoon Mr. Bob White saw the door of his enclosure swinging back and forth in the breeze. His keeper had forgotten to latch the gate, and Mr. White and several of his friends were powerless to resist the call of the wild. He looked to the left, he looked to the right, hopped here one moment, and flapped there the next. All of a sudden he noticed that his companions were nowhere to be seen. Instead, he found himself face to face with a camera in an unfamiliar garden.

Not that he knew what a camera was, but he wasn’t scared, because the woman behind it muttered gentle words, and admired his good looks. Mr. White found places to hide and kernels of corn under the bird feeder to munch on, and since his tummy was full, and there were no dogs on the premises, he decided to linger in this location for a few days.

Meanwhile, the woman behind the camera had learned that the bird’s owner was not interested in having him or his fellow escapees back, much to her consternation. A potential foster family expressed interest, having previously considered adopting a few of these good-looking quails. Equipped with a butterfly net and blankets, the woman and her husband attempted to corner and capture Mr. White, but despite their slow moves and soothing remarks, he was not willing to be caught, as he had started to enjoy his freedom.

Once he had resolved to live free, Bob White moved on, and the sweet onomatopoeic song responsible for his name, no longer enlivened the soundscape. May it still be issuing from his handsome throat and bring joy to other listeners, as it did when it resounded through our neighborhood. 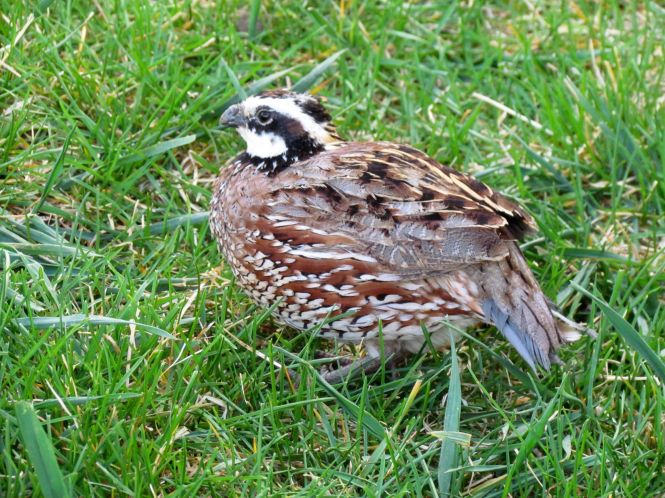 To see additional photos, to listen to the song of the Northern Bobwhite, and to learn about its usual distribution (wild birds are rare in most of Colorado, but are popular for breeding purposes), please click on the following link to the Cornell Lab of Ornithology: