Like many Colorado bird lovers, I made a September pilgrimage to a Denver suburb, where a perspicacious birder had discovered an uncommon avian species. As the rare bird reports poured into my Email inbox for four successive days, I tried to suppress the little voice in my head that told me I might be missing the chance of a lifetime. Why did I wait? If I don’t have to drive to and in Denver, I won’t—the traffic is awful. I made a pact with myself: If still reported on day five, I would take it as a hint to try my luck. It was, and I set my alarm for 4:15 for the following morning.

My anticipation woke me at 3 AM. My earlier departure time enabled me to make it to my destination before the worst of the rush-hour, even though columns of cars were already jammed along stretches of the Interstate at 5:30 in the morning. It was still dark when I arrived, and once the first light colored the horizon, I strolled along the creek bed, where the bird in question had been sighted repeatedly. Right around 7 AM, I heard an unusual vocalization, recognizable to me from recordings. A few minutes afterward, the subject of my desire appeared from its nocturnal hidey-hole and assumed a prominent position on a tree branch suffused by sunshine.

If it’s possible to fall in love with a being one knows only from photographs, it had happened to me. Laying eyes on the actual bird, I was swept off my feet. Long-tailed, with radiant jetblack feathers and a massive beak, its gentle gaze and relaxed attitude have captured my imagination ever since. Until about a week before, I had never even heard of a Groove-billed Ani (Crotophaga sulcirostris), but now I relished my first date with this unusual creature. At first glance, it resembles a corvid or grackle, but it is actually related to cuckoos. I spent about 40 minutes with Black Beauty then, and returned again after exploring the vicinity. It was still near that original tree, and seemed to enjoy basking in the sun’s warm rays. Maybe it also enjoyed basking in the attention from me and others who had come to make the acquaintance of what can only be called a celebrity.

Groove-billed Anis hail from Mexico, but make occasional excursions into Texas and sporadic visits to other states (click here for its Cornell Lab of Ornithology bio). There had been four previous sightings in Colorado, most recently in 1982. How did this lone avian end up at the foot of the Rocky Mountains? Speculations range from having escaped a cage to having been trapped in a truck or train car, but chances are that it came under its own power.

I share my fellow birders’ concern for the bird’s well-being. What will the future hold? Will it fly south to escape what could be a very harsh Colorado winter? Will someone try to capture and transport it, if not to Mexico, then at least to Texas? There are more questions than answers when it comes to these types of rare occurrences. As hundreds of us add this bird to our life lists, do we assume a special responsibility, or do we let nature take its course? 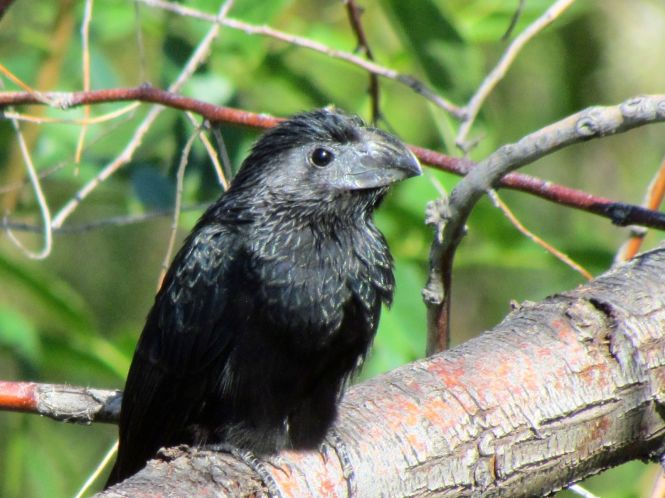 It is one of life’s certainties that what goes up must come down. Only a few days after experiencing this high, the results of a comprehensive longitudinal study published by the journal Science brought me back to earth—a much impoverished earth. The report concluded that the bird population of the United States and Canada has suffered a dreadful 29% decline since 1970, resulting in the heart-rending loss of nearly 3 BILLION birds. Some sub-populations are even more severely affected. Grassland birds, for example, have experienced a devastating 53% drop. The various reasons are mostly human-induced: destruction of habitat, toxic chemicals, climate change, house and feral cats…(read more about it here).

It is challenging not to give up hope in the face of these grim facts. I don’t like to be cynical, but I have lost faith in (wo)mankind. We are the most short-sighted and destructive creatures to have walked and altered the face of this magnificent planet, which is crying sad tears—as am I.

89 thoughts on “Birding Highs And Lows”