While hiking the Paul Intemann Memorial Trail between Crystal Park Road and Ruxton Avenue not long ago, scenes of Manitou Springs gradually unfold, and with them reminders of how marketable the hamlet has been from the moment it was put on the map.

Since George Ruxton, British explorer, travel writer, and namesake of a prominent avenue and creek, traveled through the area in 1847, and commented on the “boiling waters”, much has been said and written about its major and minor selling points. General William Jackson Palmer and Dr. William Abraham Bell, who reveled in those bubbling soda springs during a railroad survey in 1869, became enamored of the site, and once Colorado Springs had been founded in 1871 by the General, his close friend and business partner Dr. Bell was credited with the creation of its neighbor to the west, Manitou, only a year later. In the ensuing decades, it was touted as a destination for sightseers and health seekers, thanks to Colorado’s sunshine and pure air, in addition to Manitou’s miraculous mineral springs. Even though the stream of seers and seekers has ebbed and surged at times, it has continued unabated. Boosters have successfully advertised every nature- and man-made feature for the nearly one-and-a-half centuries of the town’s existence.

From our vantage point on the trail, which winds along Manitou’s southern foothills, we note some of those attractions. Even the ones which no longer serve their original function have been reincarnated, thereby extending their life.

Incline scar on Mount Manitou, with Red Mountain in the foreground

The most conspicuous mark on the landscape is a swath along the flank of Mount Manitou, location of the former Incline cable car which ran from 1907 until 1990. Initially, it conveyed supplies for a water pipeline, but was soon refashioned to carry humans. Its disassembly after a destructive landslide did not include the wooden ties which have become a major magnet for fitness chasers from near and far. As older photos attest, it used to be a steep ride, but appeared harmless in comparison with the lesser known Red Mountain Incline, a rickety and hair-raising affair, which might account for its short lifespan after its opening in 1912. Red Mountain has morphed into a hiking destination, accessible by a spur off the Intemann Trail. Somewhere near its summit, Emma Crawford, one of the luckless victims of consumption, as tuberculosis was known, chose to be buried, until her coffin was washed down the slope during a deluge. Even this macabre event was turned into a well-visited celebration, the annual coffin races happening around Halloween.

Williams Canyon, with visitor center for the caves

Beyond US Highway 24, the angular rocks that border Williams Canyon draw our attention to the Cave of the Winds, promoted since 1881, when it was discovered by two school boys. The nearby Manitou Cliff Dwellings prove, “if you build it, they will come.” Little matter that Pueblo Indians did not call this part of our state home, several collapsed Ancestral Puebloan buildings from near Cortez, Colorado, were collected by an entrepreneur, and re-erected in their current enclave in 1907, where they continue to be open to the public.

Manitou Avenue, the main street, bisects the community and is lined by shops and eateries, to which people have always flocked. The central spa building and numerous mineral springs recall one of the main reasons for the settlement’s existence — health. Adjacent to Memorial Park, we make out the latest rebirth of the spa tradition which seems to be a success. And today as yesteryear, health-conscious individuals imbibe mineral water from various springs, one of the few offerings which has remained gratis, even though schemes to sell bottled water have come and gone throughout the ages. Last, but not least, from the trail’s end, another major longstanding prosperous enterprise comes into sight, the Cog Railroad, transporting tourists to and from the top of Pikes Peak since 1891. 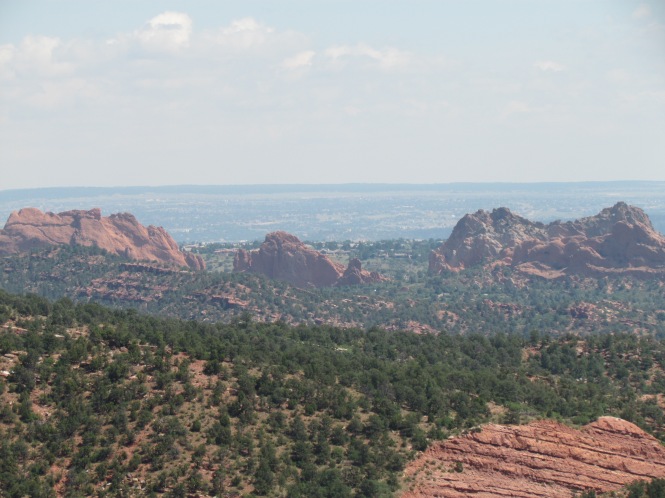 While one might admire the business acumen of the town fathers and mothers, in my eyes, Manitou’s most precious asset has been and will always be its stunning natural beauty: the breathtaking setting at the foot of America’s Mountain and Ute Pass, with sweeping views of Garden of the Gods and the Great Plains. Luckily, this is still free for everybody to enjoy.

2 thoughts on “A View of Manitou”