Whenever I am in Germany a journey to Mainz is a personal necessity, for nostalgia’s sake, and always includes a few must sees. From my father’s house I travel about 22 miles by train, profiting from the expedient public transportation system, and disembark at the station named Römisches Theater, on account of the surviving ruins of an ancient theater, one of many relics in this erstwhile Roman hub and present-day capital of Rhineland-Palatinate.

The proximity of the railroad tracks to the urban center facilitates sightseeing. Through the Augustinerstraße with its eminent rococo church and its half-timbered, centuries-old houses, I reach the core of downtown Mainz.

Its central plaza becomes the picturesque stage for a farmer’s market on three days each week throughout the year. My eyes feast on the color spectrum of fruits, vegetables, and flowers, on countless appetizing breads and cheeses. 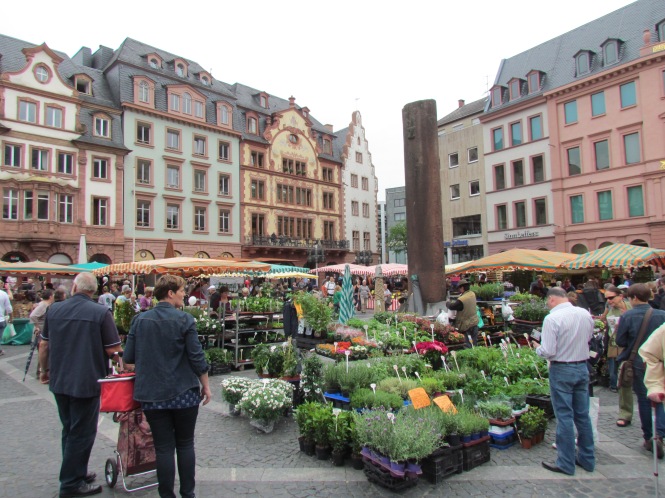 The square is flanked by ornately decorated villas and one of three Romanesque Catholic Cathedrals along the Rhine River, along with Speyer and Worms (see previous post). Each Saturday at noon, an organ matinée invites visitors to take a contemplative pause. In Colorado I miss this widespread availability of free music in one venue or another, and gladly make use of the opportunity.

Adjoining the market place opposite the cathedral is a museum, named after Johannes Gutenberg. The city’s most famous son also lent his name to the local university, my alma mater, where I met the love of my life nearly 27 years ago. In the 1400s, Gutenberg invented printing by moveable type, at least in the Western hemisphere (the Chinese preceded Europeans in this technique by hundreds of years). This revolutionized the printing process and resulted in the supreme rule of books which lasted for centuries and has only recently been slowed by the advent of digital letters. I am happy that my re-exploration after many years shows the museum as informative and interesting as I had hoped (more about the spellbinding history of paper and printing in a future post). 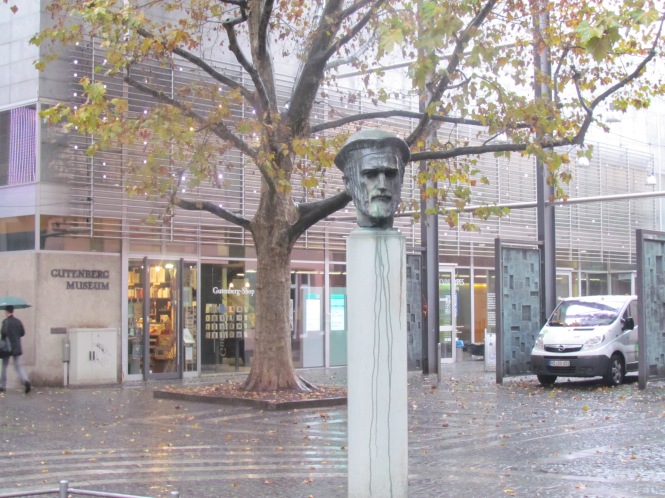 Following a 10 minutes’ walk, I reach St. Stephan’s Church which towers over the hilly southeastern flank of Mainz. Originally dating back to the year 990, the current incarnation rose from the rubble of bomber attacks in World War II.

Its shattered crystal was replaced with spectacular stained-glass windows after the resident pastor had the brilliant idea to commission them from artist Marc Chagall (1887-1985). Fortunately, he agreed. Russian-born, he left the Soviet Union a few years after the Revolution and moved to Paris. When German troops invaded their western neighbor, he went into exile in the United States until his return to France after the war, where he made his home until his death at the age of 97. Mainz is among the fortunate recipients of his inspired art. He designed 9 windows and oversaw their completion at a studio in Reims, France, during his lifetime. After his passing, his fellow artist and friend, Charles Marq (1923-2006), continued the task, using similar colors and techniques but realizing his own style nonetheless. The collection of 28 windows of varying size which run the gamut of concrete biblical scenes to more abstract motifs was concluded in 2000.

Regardless of how often I enter the unpretentious church building, I am never prepared for the cobalt splendor about to embrace me. 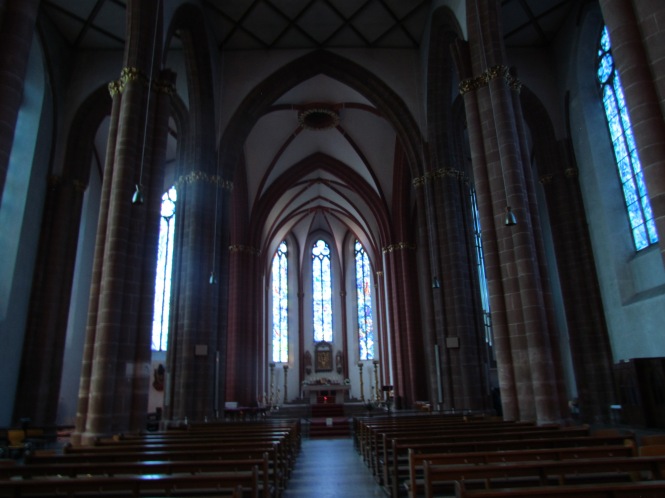 A deep blue suffuses the interior and it feels as though I am diving into a profound, calm pool. The short wavelengths emanating from the glass create the illusion of depth and contrast magnificently with bright and cheerful golds, reds, greens, and purples. 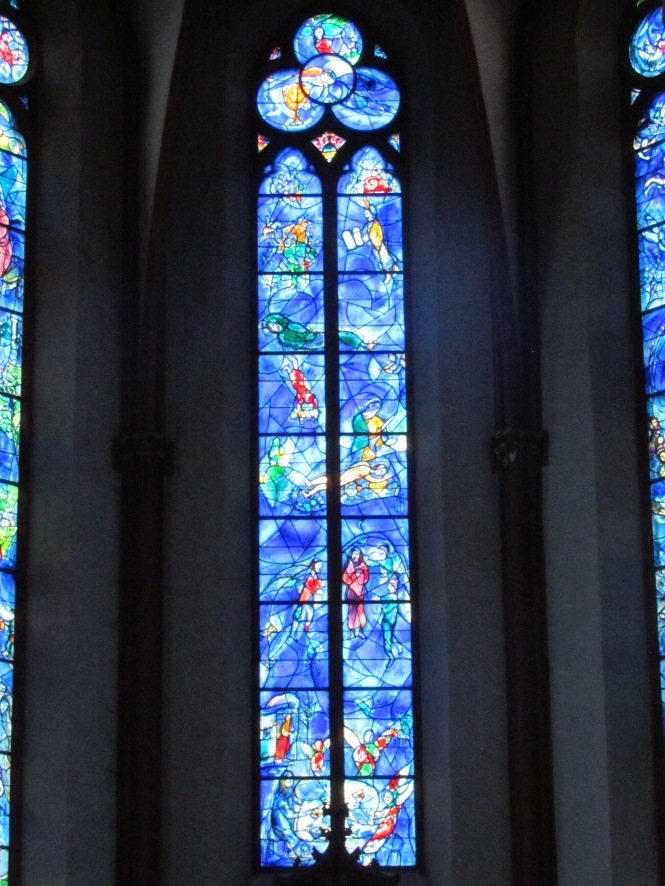 I am overcome with an immediate sense of calm and arrested time, and when my eyes adjust to the ambient light, the contrast of the colors deepens. On a sunny day, the tones sparkle and dance, but even under cloudy skies they luminesce with a strength of their own. This is not a destination to hurry through. Rather, it welcomes the viewer to decelerate, take a seat and a deep breath, and contemplate the glory.

Chagall, having escaped the threat of deportation and death by the Nazi regime because of his Jewish heritage, graciously contributed to reconciliation between Germany and France, Christians and Jews, with his exceptional bequest. What a wonderful way to propagate his pacifist ideals, and to let the visitor participate in his beautiful vision.