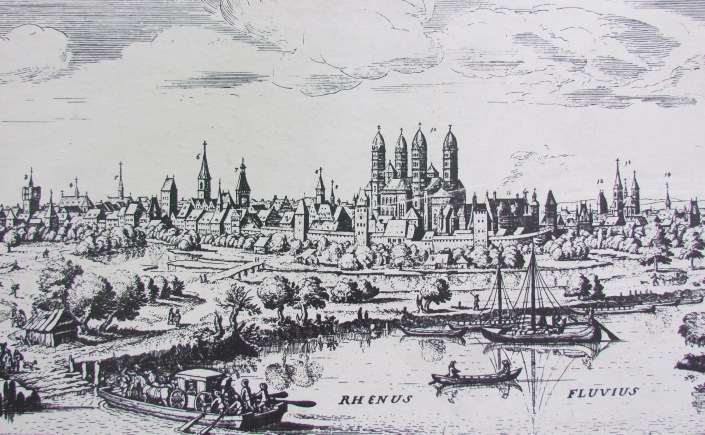 For the first time in decades, while in Germany a month ago, I spend a day in Speyer, an easy one hour train ride from my father’s house. Only vague recollections of a former visit persisted in my memory, but as soon as I arrive at the Main City Gate (Altpörtel in German, literally: old portal), they are refreshed. 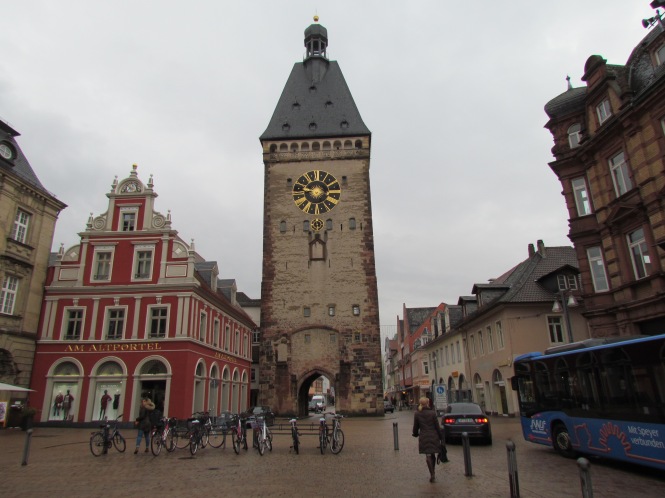 The prospect before my eyes must be one of Rhineland-Palatinate’s, if not of Germany’s, most iconic. This medieval gate with foundations reaching back to the 13th century, opens onto an ample avenue, named Maximilianstraße, the main west-east artery. 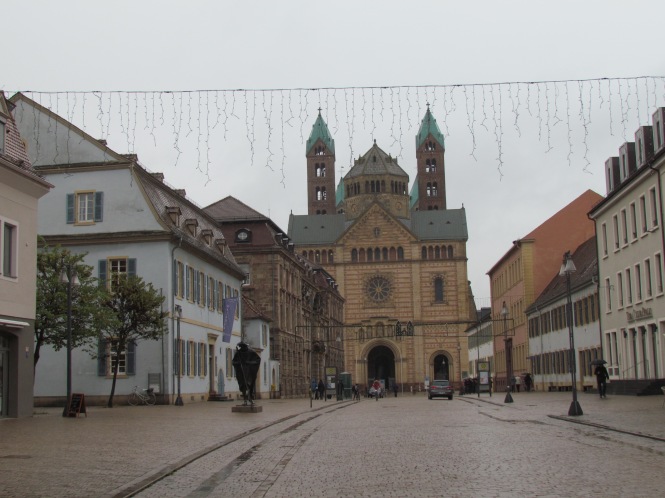 It is bordered by an amalgamation of age-old and modern buildings and culminates in the heart of this city, which is also one of Central Europe’s most awe-inspiring edifices: The Imperial Cathedral of Speyer. This exemplifies one of three sacred structures in the state built in the Romanesque style, alongside Worms and Mainz. Among those it is the tallest, most spacious, and, in my humble opinion, most beautifully colored. Its polychrome sandstone hues offer a warm welcome, even when it’s raining cats and dogs, as is the case when I am there. 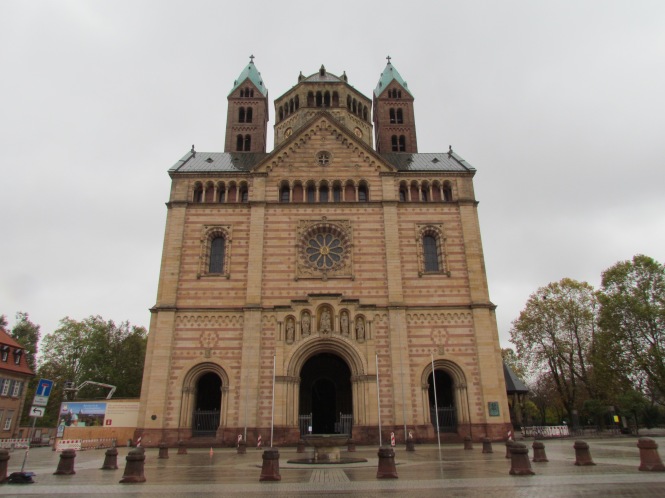 Romanesque architecture reached its acme in the 11th century and is characterized by semi-circular arches, as opposed to the pointed equivalents of the Gothic design which followed it. To me, the former appear more massive and create a down-to-earth feeling, compared with the soaring sensation engendered by the latter. Indeed, upon entering through the heavy bronze door of this colossus nearly a thousand years old, I feel dwarfed and awe-struck, an effect most likely intended by the builders. 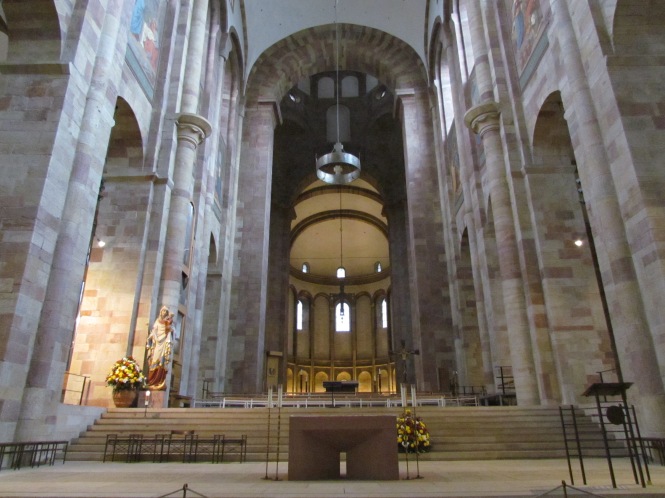 Choir and Apse of Cathedral

After my steps and gaze travel through the towering central nave, choir and apse, I descend the stone stairs into the crypt whose geometry and dimensions wow me no less. The sheer size of this subterranean space also sets it apart from the cathedrals of Worms and Mainz. What all three have in common are hefty stone tombs in which the remains of former secular and spiritual rulers rest for eternity. 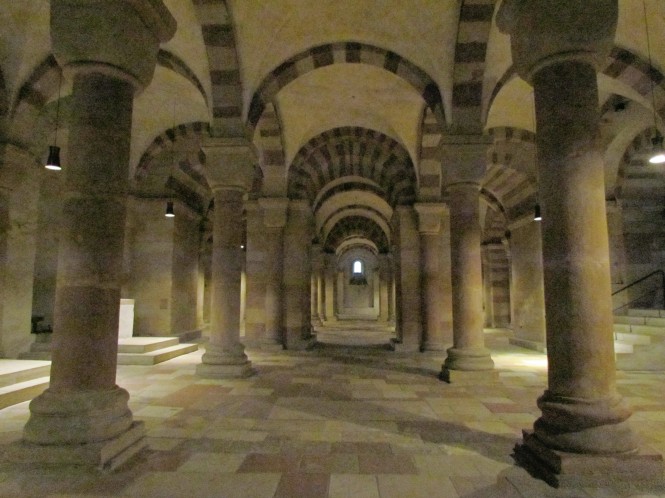 One of the chapels is dedicated to relics, body parts of saints, a custom as alien to my understanding as it is intriguing. 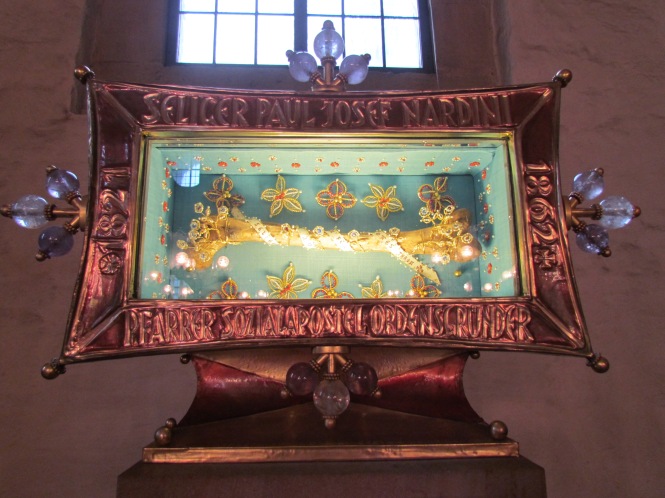 I would linger longer at this church if the Emperor’s Hall with its famous frescoes, and the observation platform in one of the towers were not closed for the winter season. I am not alone in my admiration: In 1981, the cathedral was added to the illustrious list of UNESCO’s World Cultural Heritage Sites.

In close proximity to the main thoroughfare, additional destinations abound. I direct my steps past churches from more recent centuries, as well as memorials to prominent citizens. One of them, hitherto unknown to me, was Sophie la Roche (1730-1807), a woman writer who achieved fame in the 1700s. Her novel, Geschichte des Fräuleins von Sternheim, catapulted her out of oblivion, and into the limelight of the German literary stage. She founded the first German women’s magazine, Pomona: For Germany’s Daughters, and had significant interactions with and influence on the likes of Wieland, Klopstock, Goethe and Schiller. How I had never heard of her I do not know, but I am currently remedying my ignorance by reading her biography. 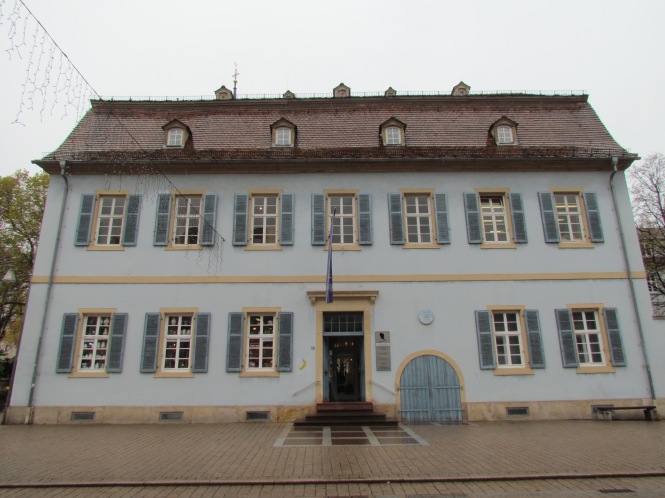 Speyer, Worms, and Mainz represented major centers of Jewish learning and culture in the Middle Ages. They were known as ShUM cities, an acronym derived from the initial Hebrew letters of their medieval names, Shpira, Warmaisa, and Magenza. All three suffered similarly in the wake of the Anti-Semitism that ebbed and surged throughout the ages, which resulted in the repeated destruction of residences and places of worship. 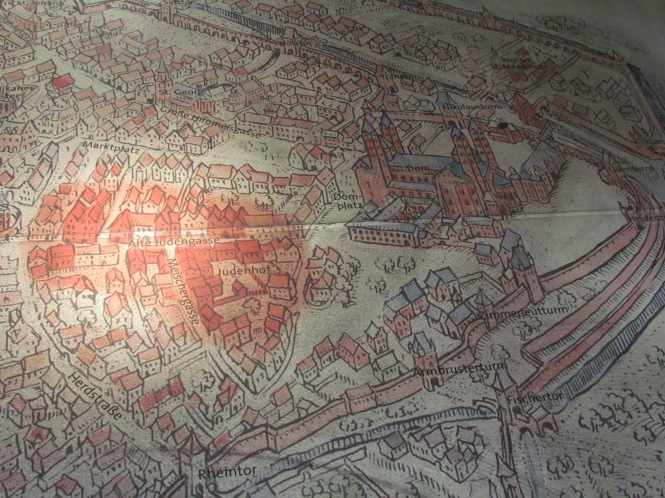 Mosaic of Medieval Speyer at the Jewish Museum

The Judenhof (Jewish Courtyard) commemorates the horrendous history of the local Jewish residents with a museum, the ruins of the erstwhile synagogue, and the oldest ritual bath north of the Alps. The synagogue was completed in 1104 and served the Jewish community for nearly 400 years, until one of many waves of banishment. 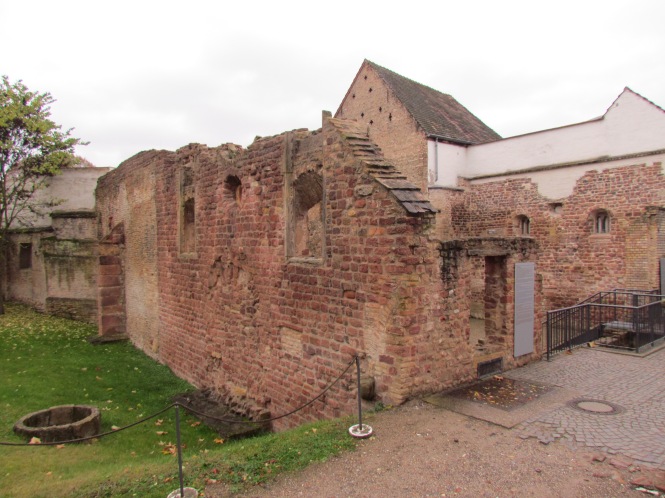 The structure was then repurposed by the town fathers. Except for surviving portions of the walls, it was destroyed in the Palatinate War of Succession in 1689 which wreaked havoc on vast expanses of this state. The ritual bath (mikvah in Hebrew) dates to 1120. Its second use as municipal arsenal after 1500 protected it from hostile interventions, and its underground position from the conflagration of 1689. 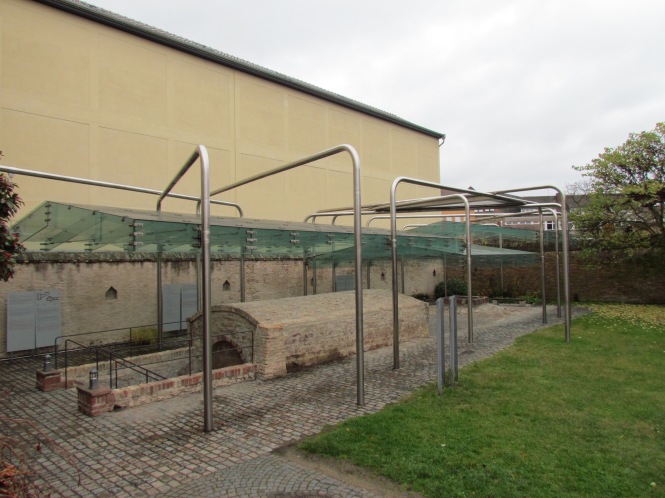 Successors to the medieval synagogue were destroyed by the pogroms of November 1938, known as the Night of the Broken Glass. Since 2012, Speyer has a new Jewish religious home, a hopeful symbol of acceptance and peaceful coexistence. Because of their legacy, the three sister cities are being considered for world heritage status by UNESCO, and a decision is expected in 2021. 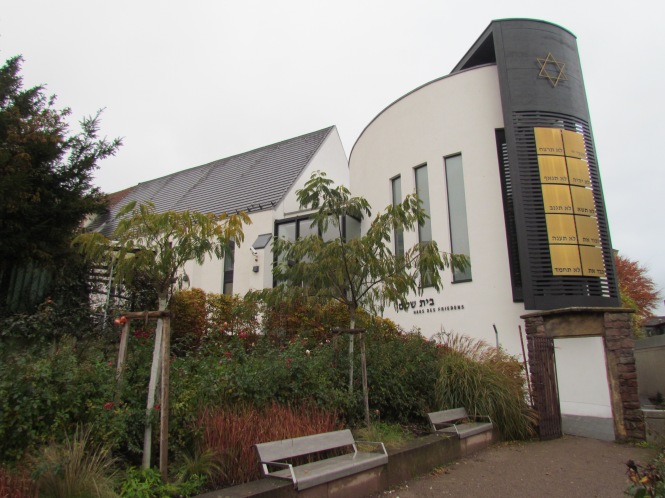 I regret that the fading hours of the day put an end to my exploration. The verdant park surrounding the cathedral which links it to the promenade along the nearby Rhine River, the Historic Museum of the Palatinate, and further alluring sites will have to wait for a future trip.

2 thoughts on “A Day in Speyer”