Castles in Germany are not infrequent. For many sightseers they epitomize Europe’s charm and myth, and any American who has taken a cruise on the Rhine will have dozens of photos to share with relatives back home. Even during my last trip to Germany I happened across several castle ruins during everyday activities. But castles in Colorado? Even if the Rocky Mountains form their own towers, turrets, and battlements, drawbridges are not among the natural features. Nonetheless, Colorado boasts a fully-formed castle, complete with drawbridge (even if there is no moat – yet) and it is a well-known area landmark, as the ever-present column of cars lining the roadside attests.

I speak of Bishop Castle, located along State Highway 165, in Colorado’s San Isabel National Forest, about 73 miles southwest of Colorado Springs. The embodiment of one man’s vision, Mr. Jim Bishop has worked on his magnum opus for nearly 60 years, according to the official website, and since his marriage in 1967, has had the support of his wife Phoebe. It is still a work in progress, so I wouldn’t be surprised if that moat were to show up after all, water shortage in the West be damned. This seems to encapsulate the attitude of the builder who has no qualms about voicing his controversial social and political opinions and who has fought tooth and nail with local and national entities about the legality of his project. Nevertheless, he has withstood any and all attempts at derailing him from the fulfillment of his design.

Even though my husband and I have heard about the castle, have even seen photos of it, when we finally stand before it, we are not prepared for the gargantuan edifice fashioned of local rock, glass and what must amount to miles and miles of ironworks.

The tallest tower tops out at 160 feet, and the tallest chimney terminates in a dragon. On the sunny autumn day of our attendance, we are deprived of the smoke-spewing spectacle which greets guests on rare occasions. Entry through the lowered drawbridge is free, but donations are welcome, as most construction costs have been financed by Mr. Bishop himself, besides those willing to fund his quest.

Many of the rooms spread out over three stories remain unfinished, some are drafty for lack of glass in the windows, but each is endowed with its own character.

We marvel at a succession of elegant arches, before entering a generous hall on the third floor. Its pointed ceiling, bisected by ornate welding, and lofty windows invoke the nave of a Gothic cathedral and its solemn atmosphere invites reflection and pause. 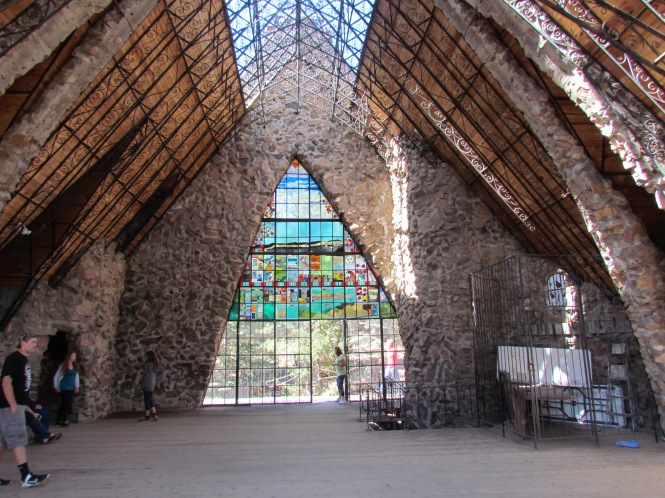 Narrow staircases lead us higher and higher, until stone gives way to metal porches and walkways hugging the exterior walls.

The castle, at an elevation of 9,000 feet, is surrounded by mountains and trees and affords glimpses of Colorado’s Great Plains in the East. 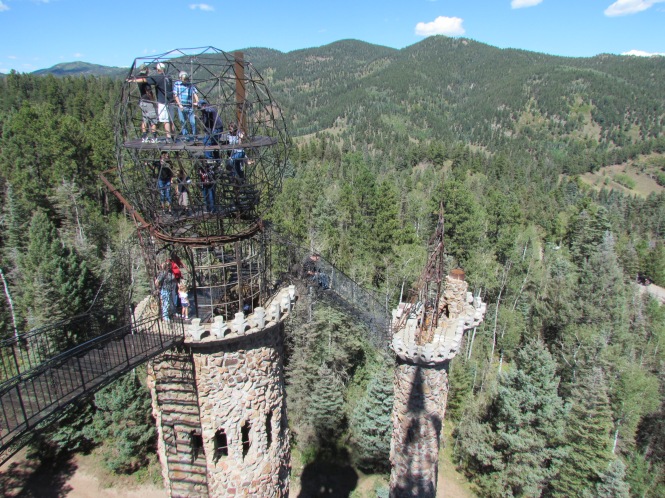 The 360 degree view from the birdcage-like globe and bridges which grace the building like a filigreed crown makes up for the slight queasiness resulting from the structure’s gentle swaying in Colorado’s fall breeze, but to those afraid of heights, my advice is not to climb beyond the third story.

Opinions about Bishop Castle and the person behind it range from approval to severe condemnation. Yet none of the visitors on site seems able to resist a sense of awe and admiration. I can’t help but reflect on the quest of another misunderstood knight, having recently re-read and re-considered the meaning of Don Quixote. I know I am a hopeless romantic, but I am impressed with and inspired by Jim Bishop who dared to follow his dream and left us a dreamlike legacy.

8 thoughts on “A Castle in Colorado”