Not far from my childhood home in Germany’s region of Rhine Hesse, an epochal encounter sounded the final death knell of the Dark Ages: Martin Luther’s courageous, if foolhardy appearance before Charles V, Emperor of the Holy Roman Empire of the German Nation, in April 1521, at what was called the Diet of Worms. It had nothing to do with helminths, or their nourishment, but a diet referred to an assembly of all representatives of the Empire in what was then the Imperial Free City of Worms.

Luther, the Augustinian monk, who lived from 1483 until 1546, had been a thorn in the side of the Catholic Church since he affixed his 95 Theses to the church door of his diocese in Wittenberg in 1517, in which he questioned some of the basic tenets of the church, most famously indulgences. He was invited to Worms to recant his sacrilegious ideas. After he declared that he would do so only if proven wrong by the Bible, his benefactor, Prince Frederick III of Saxony, who had previously asked for a guarantee that Luther would be allowed to leave a free man, smuggled him out of town in disguise, as he feared for Luther’s life. The Edict of Worms from May 1521 proved him right, as it officially declared Luther a heretic and offered a bounty for his capture.

While Pope Leo X added insult to injury by excommunicating him, Martin Luther, secreted away at the Wartburg, did not waste any time and translated the New Testament from Ancient Greek into contemporary German in only ten weeks, in order to enable his fellow countrymen and -women to understand God’s word directly, without the interpretation of a cleric. Coincidentally, the recent introduction of moveable type by fellow German Johannes Gutenberg enabled the printing and widespread distribution of the bible, and resulted in the upheaval of the medieval world order: Reformation and the establishment of the Protestant Church ensued in the following years, leading to more turmoil and culminating in the devastating 30 Years’ War from 1618 to 1648.

Worms has long prided itself of the reformer. The famous Luther Monument erected in 1868 honors him and his preceding and fellow reformers, and I passed it often during my high school days in that city. I vaguely remember the festivities on occasion of the 500th anniversary of his birth in 1983. Last year, the city joined a number of German communities in commemorating 1517, the seminal year of the 95 Theses. It culminated in nationwide special proceedings on October 31, Reformation Day. As my stay in Germany started in the middle of November, I missed all celebrations, but I retraced some of Luther’s steps during his ten day sojourn in Worms.

As tradition has it, Luther arrived in the city through St. Martin’s Gate. The original was destroyed, but has been replaced. Modern buildings have supplanted the inn in which he spent what must have been restless nights. The site of the erstwhile episcopal palace in the shadow of the Romanesque Cathedral where Luther defied church leaders and Emperor alike by refusing to renounce his revolutionary concepts is now occupied by the beautiful park of the Museum Heylshof.

Former site of the episcopal palace next to Cathedral of St. Peter 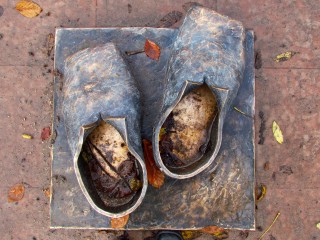 One of the earliest, still surviving structures where sermons in Luther’s spirit were preached is St. Magnus Church. I did not make time to re-visit the former St. Andrew’s Collegiate Church which houses the local history museum and a copy of a Luther bible with his handwritten annotations. One obligatory stop during each trip to Worms is the 18th century Trinity Church at the central market place, as my paternal grandparents were joined in matrimony there. Following its near-destruction during World War II, the exterior walls were preserved, whereas the formerly Baroque interior was re-designed in a modern style. A mosaic depicting Martin Luther before Emperor Charles in 1521 graces the wall behind the organ. 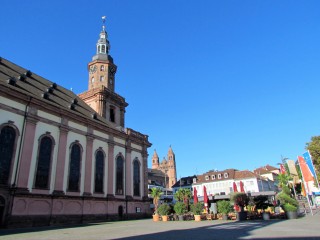 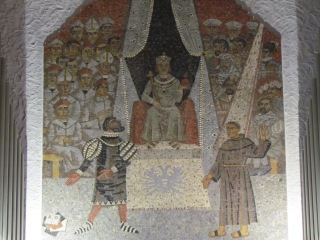 After almost an entire year of Luther festivities, a certain degree of Luther fatigue seemed to have descended upon Worms and the country, but I suspect they will recover, and conceive of another anniversary to commemorate the reformer in grand style. 2021 is not far off.

12 thoughts on “A Much Celebrated Man”