“Colorado” evokes tall mountains, alpine activities, winter wonderlands. While our fifty-three 14ers are magnificent landmarks, at least one third of our state consists of prairie and forms part of the High Plains. On a map, these predominantly eastern areas are customarily depicted in white, suggestive of emptiness. Most travelers who spend long hours traversing these vast stretches in their cars might share this impression, which was the case for my husband and me, until we decided to explore this seemingly “empty” portion of our state during repeated excursions.

The plains landscape is no less impressive than the remainder of the state, if only at closer inspection. While today’s prairie differs from its one-time state, and while agricultural fields and livestock pastures predominate, shortgrass islands survive, or have been restored. Woven of wild grasses and wild flowers, they thrive on little annual precipitation. Sundry spring and summer blooms are outlasted by enduring sunflowers whose yellow petals enliven the fetching, if muted, fall attire. During periods of drought, the hues might be subdued year-round. I see parallels between the prairie and Colorado’s upper elevations. Splendid cottonwoods along waterways are equivalent to the aspen trees of the montane zone and, like them, turn a luminous gold in autumn. The wide-open grassland is not unlike the tundra above treeline.

To enlarge a photo, click on it. To read its caption, hover cursor over it.

This predominantly flat world whose altitude gradually and imperceptibly drops from about 6,000 feet in Colorado Springs to 3,400 feet at the Kansas border seems to consist solely of two elements: earth and sky. The latter might be as blue and friendly as the cornflowers that line the roadsides in summer, or assume a threatening gray. Thunder, lightning, and the potential for tornadoes are fearsome reminders of nature’s less benignant powers. Breezes, common if not constant companions, contribute to an ever-changing cloudscape that seems to arise out of the blue. They also propel ubiquitous windmills to pump ground water into holding tanks for domestic and feral visitors. Emerald ribbons on the capacious canvas indicate streams. Rivers, like the Arkansas and South Platte, with their tributaries, equal life. Without water, there would be no reservoirs, no successful settlement, no farming, no animals. 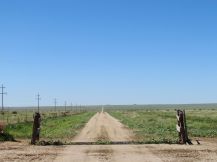 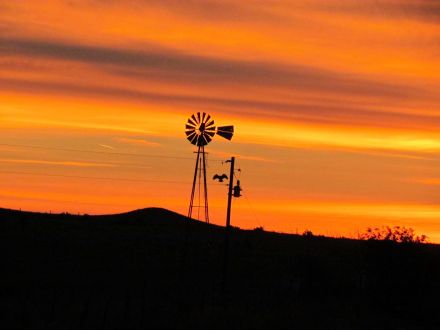 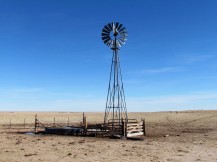 In fact, the fauna is plentiful and varied. Pronghorn browse on nourishing forbs, always with a suspicious eye on humans who nearly blasted them into oblivion before their numbers recovered. These fastest land mammals in the western hemisphere supposedly developed their speed to outrun the now extinct American Cheetah. The estimated sixty million bison that once roamed these reaches were less fortunate, and if and where reintroduced, are confined by fences. Pointed ears among the grasses might belong to a Swift Fox, or a jackrabbit. Black-tailed Prairie Dogs linger near the entrances to their burrows, which are frequently shared with Burrowing Owls. What might appear to be “a flying dog” will, at closer inspection, prove to be a an owl with lengthy limbs and expressive eyes. 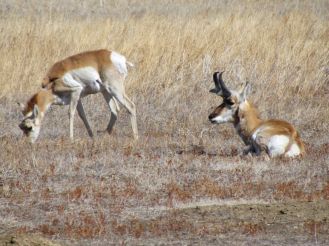 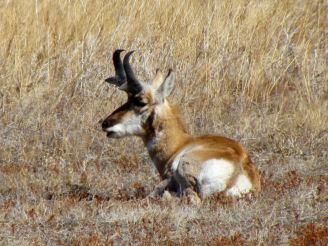 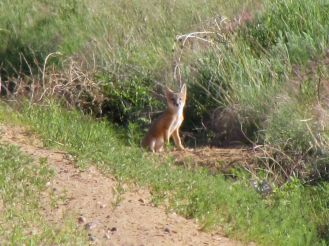 Thanks to low population density and little light pollution, glimpses into the Milky Way and more distant galaxies are afforded the stargazer. We love to camp, and the thin fabric of a tent allows greater awareness of nighttime sounds. Quivering leaves resemble falling rain when stirred by a breath of air. The nocturnal silence is punctuated by the hooting of owls, the croaking of frogs, the multifarious vocalizations of coyotes. Few creatures epitomize the West like these wild cousins of our beloved domestic animals, and few creatures polarize as much – esteemed by some, despised by others.

One of the main motivations for most of our journeys nowadays is my desire to acquaint myself with inhabitants of the avian kind. Because eastern Colorado is part of the Central Flyway, numerous species pass through it. Thanks to its high numbers in this environment, the Lark Bunting was chosen as Colorado’s state bird. Flocks flutter alongside the car, similar to Horned Larks who risk their lives, darting in front of speeding vehicles. Orchard and Bullock’s Orioles, Brown Thrashers, and various sparrows abound, similar to Western and Eastern Kingbirds who owe their common names to their regal appearance, and their scientific name, Tyrannus, to their aggressive territorial behavior. The Northern Mockingbird, Mimus polyglottos (literally many-tongued mimic), likewise lives up to its reputation and impresses with a repertoire of musical scales copied from any number of feathered fellows. 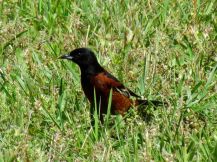 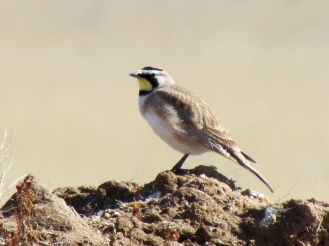 Since those first encounters a few years back, I have discovered almost every one of these species in eastern El Paso County’s own prairie habitat, much nearer to our doorstep, in corroboration of the old adage that one only notices what one knows. Far away or close to home, the Western Meadowlark is among my favorites. To assert that one is never out of earshot between the edge of our town, and the edge of our state, is no exaggeration. Its full-throated melody brings cheer to my heart every single time and reminds me that Colorado’s prairie, rather than being empty, is filled with lovely sounds and sights. 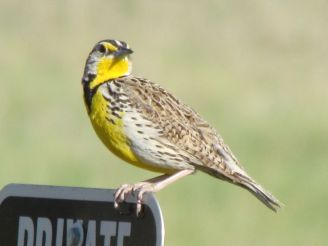