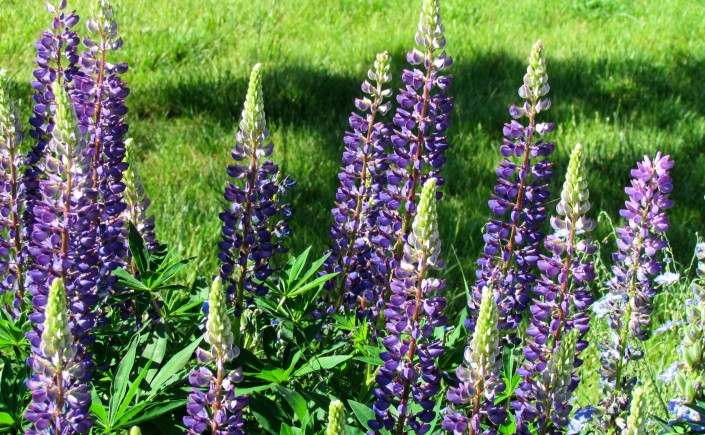 In the midst of winter, when daylight is fleeting and nature’s attire muted, I thirst for more sunshine and color. It is almost inconceivable that the vegetation that appears lifeless will revive once more. Even though winter solstice holds the promise that daytime will lengthen and nighttime lessen, those changes are imperceptible for nearly a month. The longer days do not translate into Flora’s reawakening immediately, and despite a glimpse of some green here, or of some pink or yellow there, the lifeblood arrives only in a trickle, not a steady flow. At this point I am grateful for the precocious hyacinths and daffodils that peek their little heads above ground, even if it is still blanketed in snow.

When I blink again, it is May, and the trickle-flow has swelled to a flood. Previously leafless trees don first a gauzy veil, and next an emerald robe. Where last season’s flower stalks still stand brown and desiccated, new green shoots suddenly appear, and before I turn around, bear candles of purple, cups of orange, clusters of red.

I am not an ardent gardener, but I like to get soil under my fingernails now and again. Having inherited a patch of soil, we try to keep it up for the birds, the bees, and the butterflies. Previous caretakers left their own touches, and we encourage their legacy, while seed by seed, we add our own. Permissive gardening might be our maxim, and our lawn is the antithesis of immaculate, and our flower beds the opposite of ornamental. We stopped using herbicides a few years back, and other than the occasional digging of dandelions and pulling of other so-called weeds, anything goes. 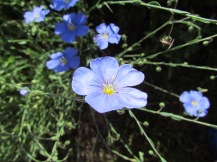 Where the grass dies, we sow wildflower seeds. Silvery Lupines have established themselves well, similar to its neighbor, Western Blue Flax. Whoever makes its acquaintance learns to marvel at its daily pattern. Come morning, it forms a lake of blue saucers, come evening, its wiry stems are nearly bare. Repeat performance the following day. Every year, the sea of blue extends slightly more beyond the shore, and we look forward to our future backyard ocean. 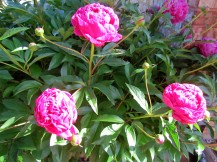 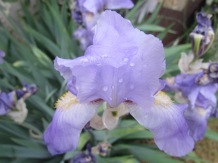 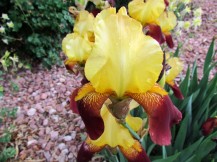 Various strains of roses, peonies and irises are our only claims to respectability. The yet-to-bloom lilies might qualify as well. 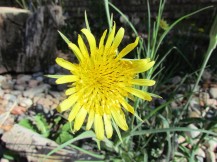 California Poppies tilt their smiley faces toward the sun before wrapping themselves in a tight cone in the course of the day. Goat’s Beard (aka Yellow Salsify), a European import, follows suit, before it transforms into a blow ball reminiscent of dandelions. Johnny Jump Ups are content with their rocky residence at the south side of the house. My favorite childhood flowers, snapdragons, rear up in a variety of locations.

Among our much loved floral companions are columbines. Years ago, a handful of seeds germinated, and what started with a few isolated plants has spread like a joyful riot among the juniper, rose bushes, and cinquefoil. The Colorado Blue Columbine (Aquilegia caerulea) happens to be our state flower, and in our yard it coexists with its many variants. Whoever chose its genus name, Aquilegia, saw in its blossom an eagle’s claw (aquila is Latin for eagle); whoever named it columbine, envisioned a dove (columba is Latin for dove).

37 thoughts on “May Flowers”