About eighteen miles south of downtown Colorado Springs lies a unique sanctuary, designated as a nature preserve in 1993, when the Nature Conservancy signed a 99 year conservation lease for 1,100 acres of public land with the State of Colorado. The subsequent purchase of additional private land expanded the total acreage of Aiken Canyon Preserve to 1,600. It was named in honor of Charles Edward Howard Aiken (1850-1936), who grew up in Vermont and Chicago. After Chicago’s Great Fire of 1871, he relocated to Colorado with his family, where they ran a sheep ranch a few miles south of the future preserve. Charles, a bird collector since a young age, had been apprenticed to a taxidermist in Chicago, and continued this profession in Colorado. As was common in the days before widespread photography and use of binoculars, the sad method to learn about birds was to shoot and stuff them. Aiken became a taxidermy expert and operated his own shop in Colorado Springs. He contributed greatly to the knowledge of the avifauna of Colorado, and through his travels, of neighboring states.

As Aiken Canyon’s water is supplied only by an intermittent creek, it never saw any significant settlement, logging or grazing, and still harbors an intact, original Rocky Mountain foothill ecosystem attractive to a varied fauna. Mammals include raccoons, black bears, deer, elk, and mountain lions, though I have only seen squirrels and rabbits during my repeated forays. At least 142 avian species have been documented, according to eBird. Bees and butterflies join the birds in the warmer months, as do other insects, lizards, and snakes. It was here that my husband and I had our encounter with a Prairie Rattlesnake, stretched out across the trail one July day. Luckily, it simply slithered across and curled up behind a rock for a siesta. We parted peacefully, but with an increased awareness on our part of the potential of reptilian appearances.

In 1996 a field station was constructed, with walls fashioned out of a straw core, and a stucco surface the color of the surrounding soil. For two decades, volunteer staff provided information about the land, its history, and its denizens. Because of fungal contamination in the straw, it was torn down in the autumn of 2016, much to the chagrin of helpers and visitors alike. The space sat empty until the completion of a covered pavilion with picnic tables in the spring of 2018. 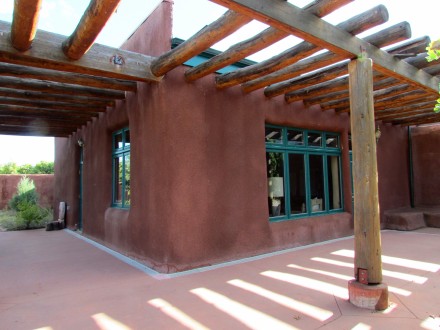 View from the field station’s porch

Even the outhouse is attractive 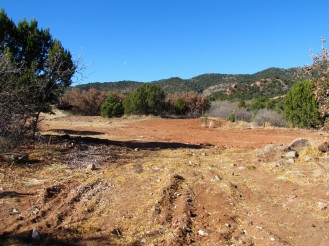 Empty space after field station was torn down

Access to this pristine parcel is afforded via an easy to moderate four mile trail that bars pets, bikes, and motorized vehicles. The first portion of the narrow path meanders through a grassy meadow and a dry creek bed that carries the warning to seek higher ground during flash floods. The greatest challenge is trying to decide whether to hike the steepening loop in a clockwise, or counterclockwise direction. There is much for the eye to gaze at. The red ground is littered with leaves, pine needles and cones, and sprinkled with cactus, yucca, and additional wildflowers. Scrub oak and mountain mahogany make up the tangled understory, medium-height junipers and pinyons are dwarfed by tall Ponderosa Pines. Islands of whimsical sandstone formations jut out of the verdant canopy and tickle one’s fancy. A short side trail leads to a promontory with views of the expansive plains in the east, the Wet Mountains in the west, and the Spanish Peaks in the south. 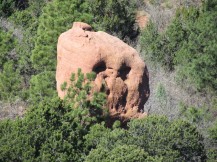 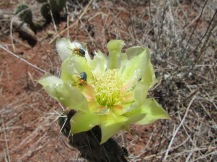 Native Blue Grama grass growing across the trail in August 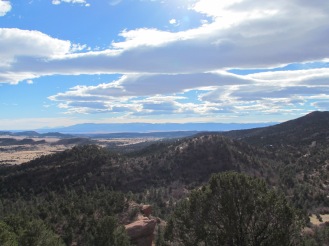 Looking south from the overlook on a November day

Spanish Peaks in the haze

A three-quarter mile spur veers off the main loop and leads to the ruins of a log cabin that owed its existence to a local natural spring. The dwelling was likely built in the 1920s or 30s, but has long since collapsed. A seeming contradiction to the statement that the canyon was never settled, it left such a small footprint that it did not significantly change the geology or biology of its environment.

Remnants of the cabin 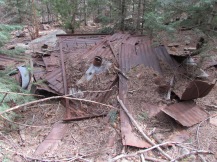 This site, surrounded by trees 50 feet tall, never fails to stimulate my imagination. Remnants of the wooden building, its metal roof and pipes lie scattered next to timeworn utensils – a tattered bedspring, threadbare shoe soles, glittering glass shards, rusting cans. Just beyond this former domicile, a tall rock provided the side wall of a small corral for domestic animals. Spikey leaves reminiscent of iris suggest the tender care of an erstwhile gardener. While I have never seen them in flower, my mind is tantalized by the potential and prospect of luminous blooms in this sheltered vale. Who once called this spot home, far away from town, with bears and mountain lions as neighbors, when the promise of colorful spring blossoms brightened the long, dark, cold winter nights?