During January’s excursion to seek out the Pink-footed Goose, a rare European visitor in North America, I also beheld a handful of Snow Geese, mixed in with gaggles of Canada and Cackling Geese. In February, my attendance at Lamar’s 17th Annual (my first) High Plains Snow Goose Festival in Colorado’s southeastern corner, exposed me not only to a handful, but to a multitude of Snow Geese on their late winter northward migration. During various festival-associated field trips, we saw and heard Snow Geese nearly incessantly—feeding on fields, flying in formation, or floating on lakes—in numbers that ranged from single birds to thousands. 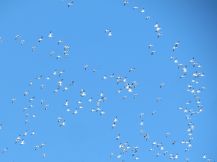 We birders good-naturedly ridicule ourselves for willingly forsaking sleep to catch the early bird, so to speak. On the event’s final day, a sunrise trip was offered to a reservoir, where Snow Geese are known to roost. Seven of us gathered at the meeting place at 5:15 AM, before we climbed onto the school bus that carried us to our destination in utter darkness. Once there, our driver turned off the engine, and we were greeted by countless bird voices, even before we could discern the whitish ribbon of their mass at the water’s edge in the graying morning light.

According to the Colorado Division of Wildlife ranger who accompanied us, we were looking at 15,000 geese. The day before, he had counted 40,000. As the sun slowly bathed the scene in an auburn glow, one vociferous skein after another arrived, carrying an estimated 10,000 additional birds. They gathered along the far shore of the lake, and I was unable to capture a single close-up. Fortunately, I had no trouble approaching the migrant geese winging their way through a beautiful mural in downtown Lamar, and they are depicted in the topmost photo. 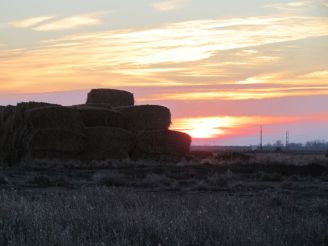 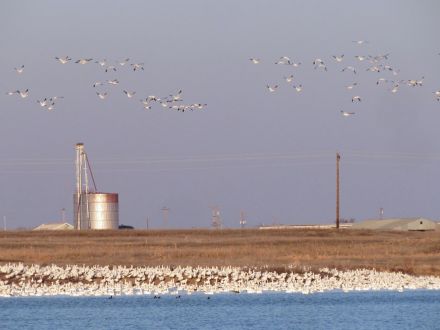 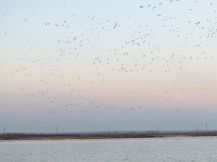 One of the reasons the birds kept their distance—hunting. They were wary of humans. Like many nature lovers, I have mixed emotions about this activity. Not a hunter myself, I am nonetheless aware of the necessity of controlling certain animal populations. Snow Geese winter in the US or Mexico and migrate all the way to the Canadian and far-northern Alaskan tundra for the breeding season. Global warming and civilization have benefited their species. Earlier snow melts in the Arctic prolong the breeding season, and the availability of man-made reservoirs and agricultural crops in what was once wild prairie, improve survival during their twice-yearly journey. They have, however, been too successful, and depletion of their precious Arctic habitat is of concern not only for themselves, but also for other animals.

Even though it saddens me to visualize people shooting at these beauties with guns instead of with cameras, my rational self knows this is a necessary and beneficial intervention. We no longer live in Eden, where nature can balance itself. It is easy to criticize hunters, but in many instances their fees help protect crucial animal habitat, and their actions help maintain healthy populations. Instead of disparaging one another, we need to collaborate to tackle today’s challenges. “We’re all in this together,” as Red Green has long been telling us.

50 thoughts on “White As Snow”