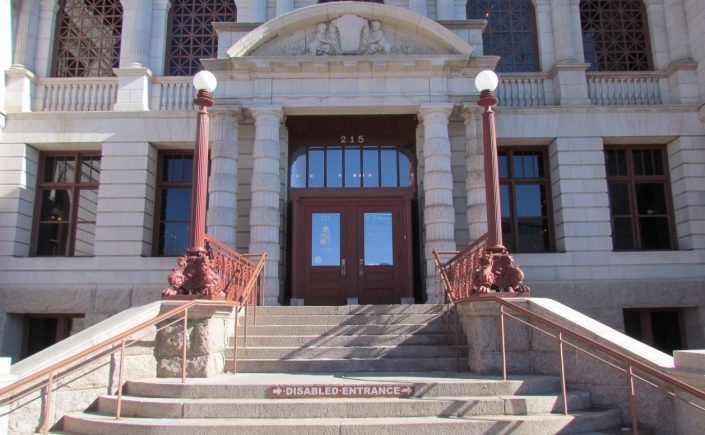 Welcome back! As announced last week, today’s tour will afford further glimpses of the Colorado Springs Pioneers Museum, located in the historic El Paso County Courthouse. As it reopened on July 9, 2020 after being closed for over 3 months, you don’t have to limit yourself to a virtual visit (but please wear your mask and keep a safe distance from other visitors).

Once you walk up the front steps and through the front door into the lobby of the 2nd floor, you will behold one of the most arresting pieces of equipment inside the building—the 1917 Bird Cage elevator, fashioned by the same Otis Company still in the elevator business today. The interval between the courthouse’s opening in 1903 and the elevator’s installation was presumably due to a lack of funds. 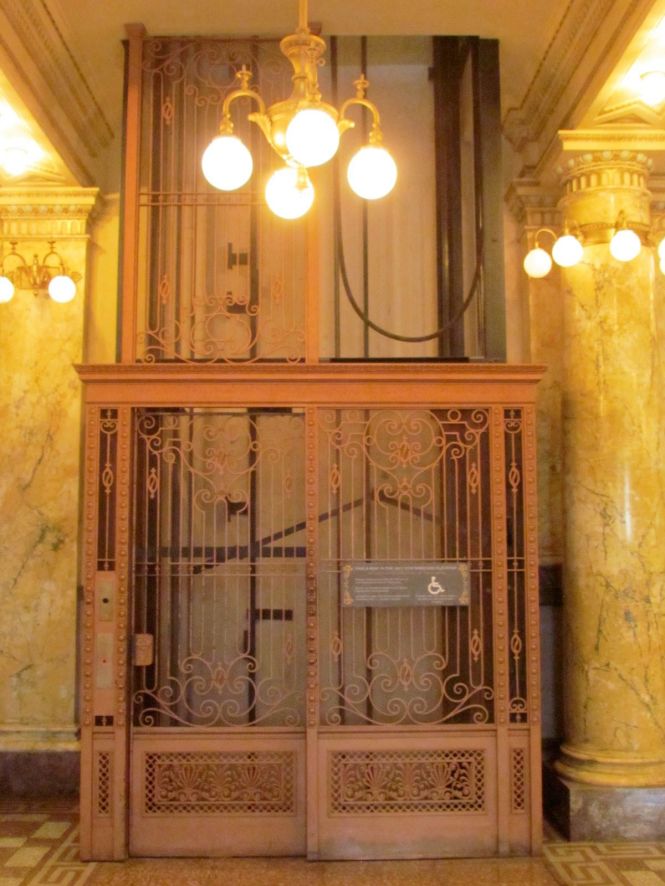 Unless you suffer from claustrophobia and/or agoraphobia, let’s ride the now-automated contraption (it used to have an operator in the early days) to the third floor with its Division I Courtroom, restored to its original splendor. If you paid attention last week, you might have picked up on my description of “the seemingly central clock tower.” It was actually offset 8 feet to the west to allow this courtroom to be built large enough for its needs, but the asymmetry is discernible only from the outside. 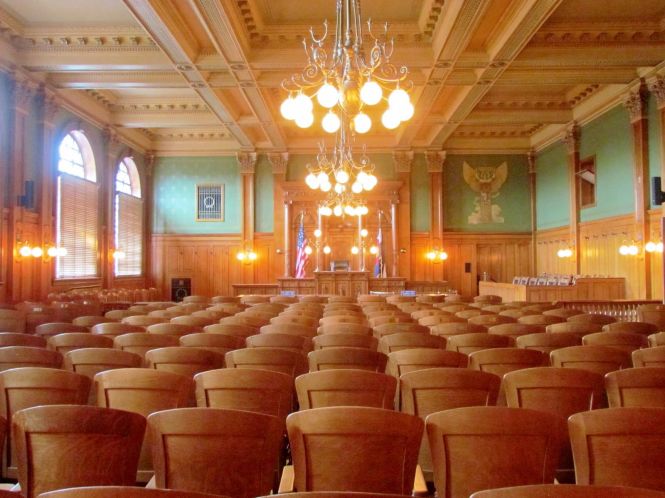 Today I will focus on our museum’s “permanent” exhibits (whose lifetime is about 10 to 15 years). It is impossible to do them justice with a few photos and words, but I will try my best without overwhelming you with too much information (my apologies if you have already fallen asleep 😊). One of the reasons I enjoy volunteering here is the fact that our museum director, curator, and staff are committed to providing an honest view of the history of Colorado Springs and the region, while questioning long-held notions about “Manifest Destiny” and the settlement of the American West. The displays are inclusive and avoid the one-sided point-of-view that has proven so divisive and destructive for our society.

In The Story of Us, each letter of the alphabet commemorates a significant person, place, or event in Colorado Springs, from A for Antlers Hotel, one of the most famous and enduring guest accommodations (the other is the Broadmoor) , to Z for Zoo Park, the first zoo. S celebrates local Sankofa culture as shown in the diorama. 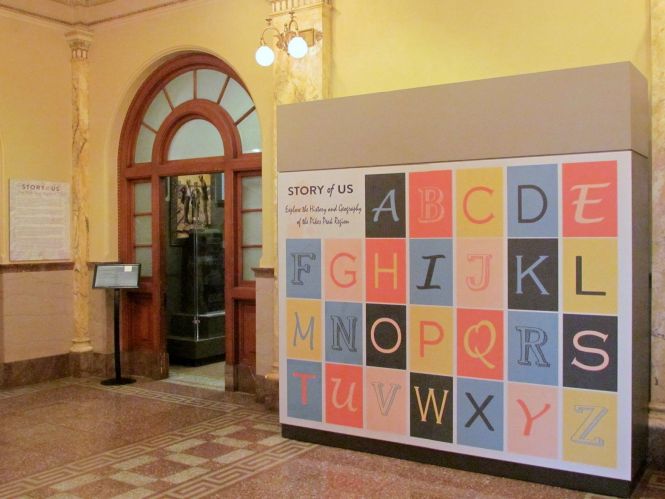 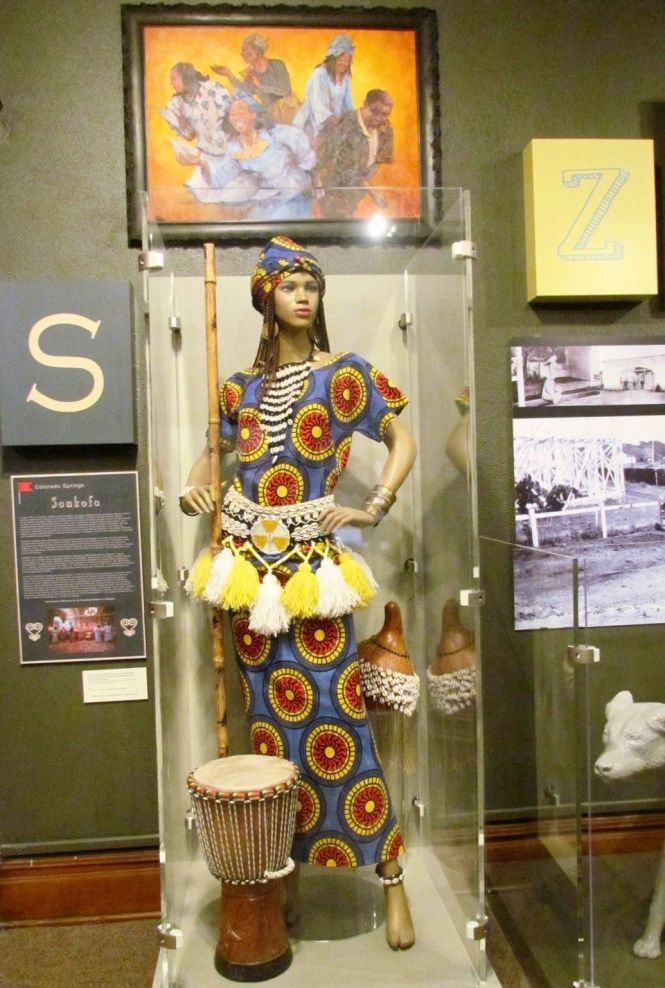 Cultural Crossroads honors the rich legacy of Indigenous peoples. The Front Range of the Rocky Mountains represented not only a geologic intersection between the Great Plains and Rocky Mountains, but a cultural one as well, where the Utes (known as The Mountain People) interacted with numerous Plains Tribes, among them Cheyenne, Arapaho, and Kiowa. Objects here represent more than 30 different tribes. 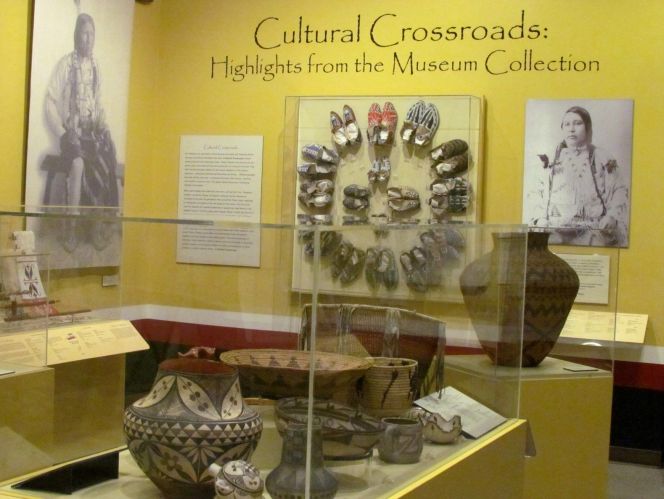 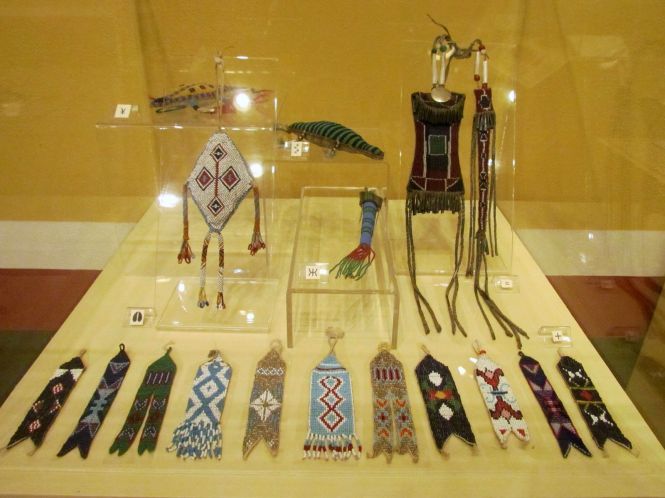 A Home of One’s Own pays tribute to author Helen Hunt Jackson, whose life and achievements I have described in a previous post. Visitors tend to be fascinated when they learn that the structure visible in the background represents a portion of Helen’s actual residence, not a replica. It was dis- and re-assembled not once, but twice, as it was also showcased in the museum’s previous home. 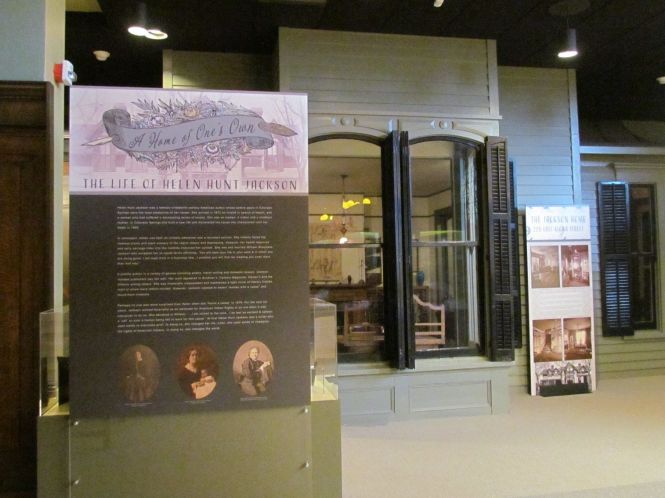 Any Place That is North and West (also the title of a Langston Hughes poem that makes me tearful each time I recite it) tells the inspiring stories of African-Americans who came to Colorado during the Great Migration, in which millions of Blacks left the Jim Crow South to find freedom and opportunity for themselves and their loved ones. Fannie Mae Duncan, founder and operator of Colorado Springs’ own Cotton Club, was the focus of an essay I wrote in honor of Black History Month earlier this year. 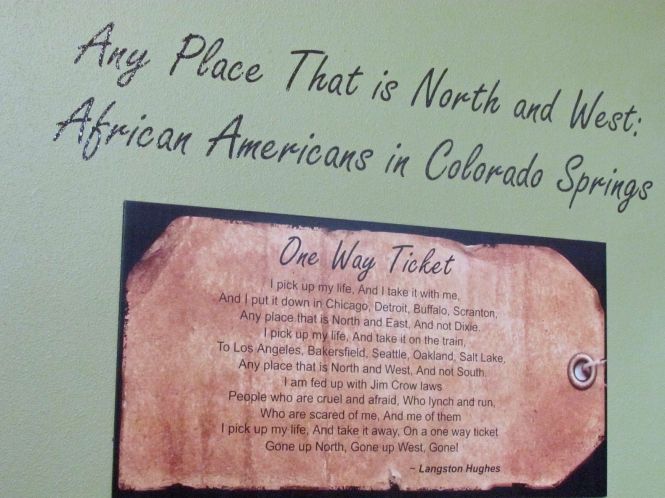 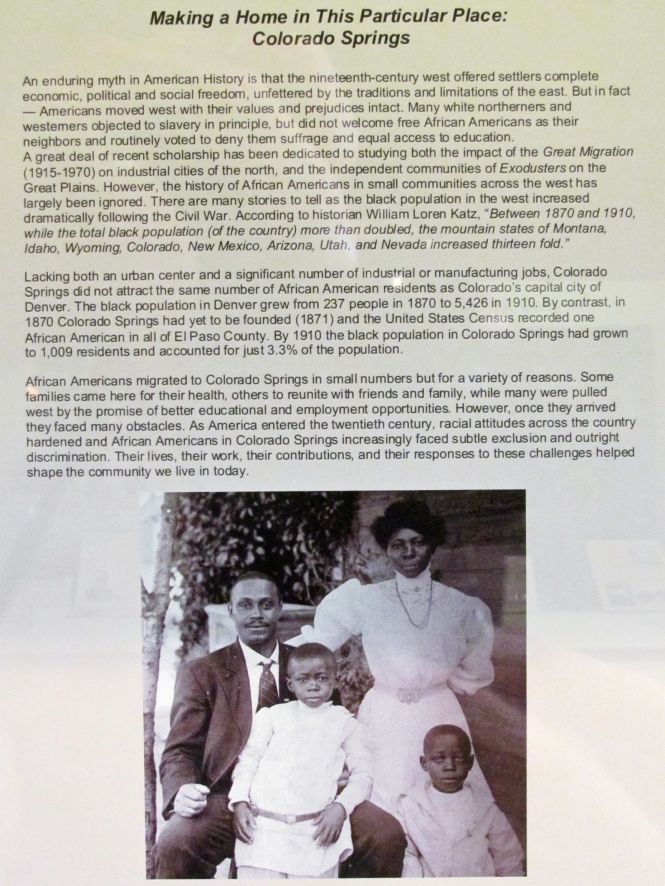 From Paris to the Plains retraces famed potter Arthur Van Briggle’s journey. A gifted artist from Ohio whose talent was fertilized by a sojourn in Paris (whose isn’t?), he came to Colorado Springs seeking a cure for his tuberculosis—in vain. He died at the age of 35, but not before having recreated a matte glaze dating back to the Ming dynasty which became all the rage. His accomplishments would have been impossible without the tireless support of his wife and fellow artist, Anne, who continued to create Van Briggle pottery after his death. His death mask and their intertwined hands on a vase of their making are among the most affecting artifacts. 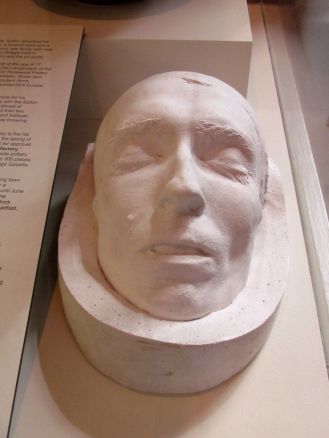 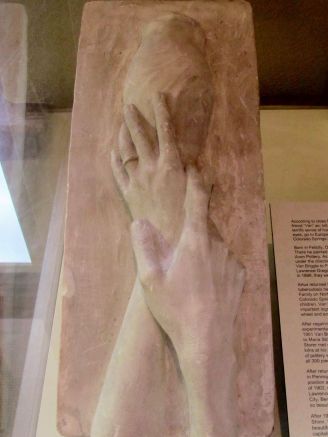 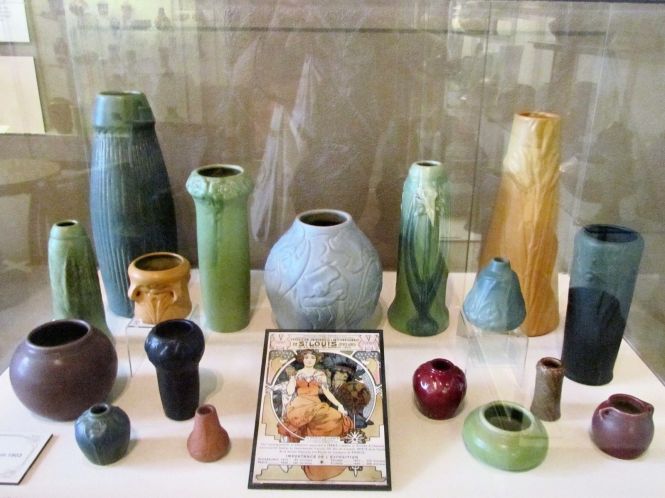 Last but not least, the remarkable life of General William Jackson Palmer—Quaker, abolitionist, volunteer Union soldier in the Civil War, railroad builder, founder of Colorado Springs in 1871, and generous benefactor—is explored in Evidence, which opened in 2019 as the first of three new displays designed to celebrate our city’s approaching sesquicentennial. A new Cultural Crossroads exhibit scheduled to open this year was postponed until autumn 2021, and Colorado Springs@150 will open in January 2021. 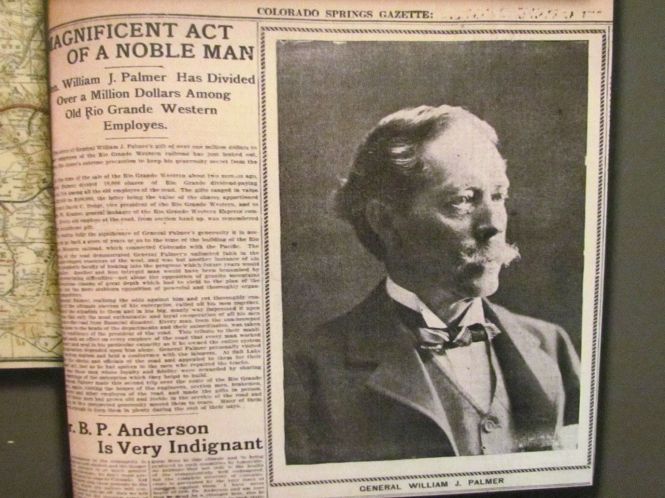 If you live nearby and have never, or not for a long time, visited the Colorado Springs Pioneers Museum, or if you are traveling through the Pikes Peak region, please drop in. Something interesting and stimulating is certain to await you, so come and come often, especially since the museum is free (donations are gratefully accepted). For further information, follow the link to the museum’s website: https://www.cspm.org/

33 thoughts on “Welcome back to the Colorado Springs Pioneers Museum”