When reflecting on a possible blog post theme suitable for the waning year, I didn’t feel inspired to offer the traditional end-of-year-review, but thought of a cherished spot on the map where I spent a lot of time during this, and previous years. I recently wrote about one of my happy places, Fountain Creek Regional Park. Chico Basin Ranch is another.

As opposed to the former, which is located about 5 miles away from our front steps, the entrance to the latter lies 35 miles east from our driveway, so I don’t make it there as often as I would like. While I didn’t visit Chico Basin every single month this year, I have experienced all seasons and months there during the 5-plus years I have been privileged to know the place.

At nearly 90,000 acres, Chico Basin Ranch stretches across parts of both El Paso and Pueblo Counties, as it straddles the county line. It is one of the few remaining uninterrupted expanses of land in the United States with surviving native shortgrass and sandsage prairie. Almost as soon as I started spending time in prairie habitat, I learned to appreciate the landscape for its vast horizons, big skies, stark beauty, and hardy plants and animals. Prairie birds have always been among my favorites: Western Meadowlarks, Lark Buntings (the Lark Bunting is Colorado’s State Bird), Sage and Curve-billed Thrashers, Horned Larks, kingbirds, sparrows, and various other species. A comprehensive longitudinal study published by the journal Science in 2019 concluded that the overall bird population of the United States and Canada had suffered a dreadful 29% decline since 1970, resulting in the loss of nearly 3 billion birds, with grassland birds having experienced a 53% drop in numbers. All the more reason to protect those tracts of grassland that still exist. And to restore as many others as possible.

To enlarge a photo, click on it. To read its caption, hover your cursor over it. 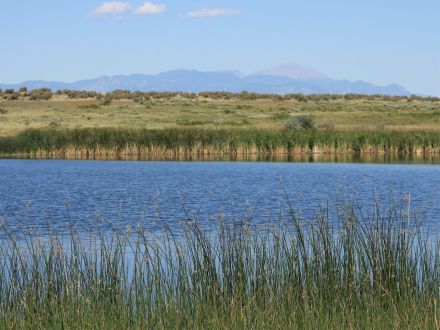 Headquarter Pond with Pikes Peak in the West 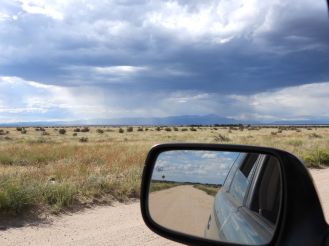 Which way to rain?

View of the Spanish Peaks in the South, with rare snow on the ground

Chico Basin Ranch belongs to the Colorado State Land Board, but has been leased and managed since 1999 by an organization that became known as Ranchlands and is made up of ranchers who value land stewardship and conservation. The ranch raises seedstock Beefmaster cattle and Beefmaster-cross commercial calves. According to the organization’s website, it also engages “in guest programs, hunting and fishing, leather product manufacturing, education programs for K-12, college students and adults, ranch management training programs, arts programs, and ranch management services.” Additionally, the ranch offers a home to free-ranging horses, plus one very curious and affectionate burro who is known to poke his head into the open car window looking for TLC. The loveliness and conspicuous frolicking of the herd of horses resulted in a previous post which you can find here.

The presence of five spring-fed lakes and two small streams, Chico Creek and Black Squirrel Creek, assures the survival of a wide array of local flora and fauna, including some trees in an otherwise treeless environment. Insects abound, many rare ones among them, and all five classes of vertebrates are represented. Pronghorn, deer, jackrabbits, prairie dogs, and coyotes make their homes here and it’s the only locale where I reliably see porcupines. Before each trip to Chico, my husband always tells me “watch your step,” on account of the resident prairie rattlers—a helpful reminder, as birders tend to look up! Besides the lowing of cows, whinnying of horses, yelping of coyotes, barking of prairie dogs, buzzing of insects, and trilling of birds, the summer soundscape also resounds with the croaking of bullfrogs, which are numerous in the ponds and often sun themselves in plain view.

The circle of life 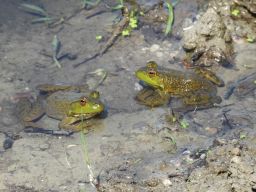 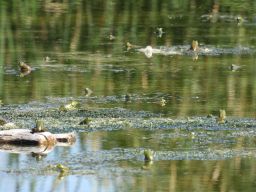 Not surprisingly, all this water and attendant life act as magnets for migratory birds as they travel along the edge of either the Pacific or Central Flyway which overlap in this part of the country. This special setting has made Chico Basin Ranch birding hotspot #1 in El Paso County, with 311 observed species, and #2 in Pueblo County, with 320 species, a high only exceeded by Pueblo Reservoir with 340 reported species. It is also the reason why one of Colorado’s three banding stations is operated on the El Paso County side of the ranch twice yearly during migration. If you would like to read about this fascinating experience in more detail, please take the time to visit this previous post. 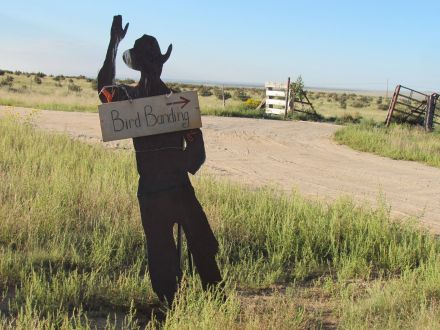 Entrance to the banding station 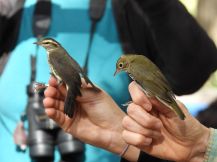 Banded Northern Waterthrush on the left, Ovenbird on the right

It is fitting for a post that will straddle two years to also look ahead. What is true for many tracts of land is true for Chico Basin Ranch, whose future is uncertain. Ranchland’s lease will expire in 2024 and the Colorado State Land Board has suggested different uses for the land. A few years ago, its members suggested to split the ranch into different parcels to make more money from leaseholders, but changed their mind when they were flooded with correspondence from concerned citizens who emphasized the importance of keeping the land together.

One would assume that a Land Board’s primary goal is to protect the interests and the health of the land and all its denizens, but it was actually created to provide funding for public K-12 education, which is obviously an indispensable need. But so is the protection of surviving native prairie which has otherwise vanished from the majority of the Great Plains. Depending on the decision by Colorado State Land Board, which is expected soon, Chico Basin Ranch might no longer be the special and wonderful oasis it now represents. But many individuals and organizations have spoken out on behalf of this unique land, and there is still hope that the responsible party will listen and find a way not to prioritize economy over ecology.

A gorgeous Scaled Quail perched atop a cholla at Chico Basin Ranch.

I conclude by wishing each of you a healthy and peaceful new year, and with the more far-fetched wish that humanity will finally realize that the health of Nature has to become our top priority because without a healthy Earth, nothing else matters.