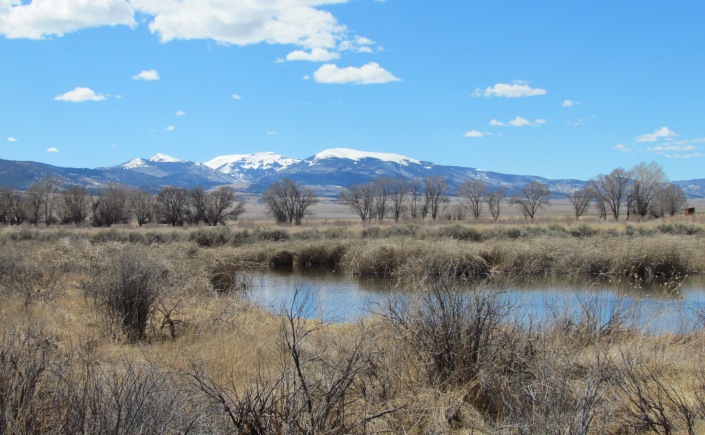 The spring and fall migrations of Sandhill Cranes through Colorado’s San Luis Valley is one of our state’s highly anticipated spectacles. In March 2011, my family and I witnessed it for the first time, during the annual Crane Festival, and I returned again in 2014. On that occasion, I experienced the gathering of thousands of these magnificent birds on a field for the night. Their raucous evening arrival and morning departure left an indelible impression, and earlier this year, I set out for that destination again, hoping to spend more time in their presence. 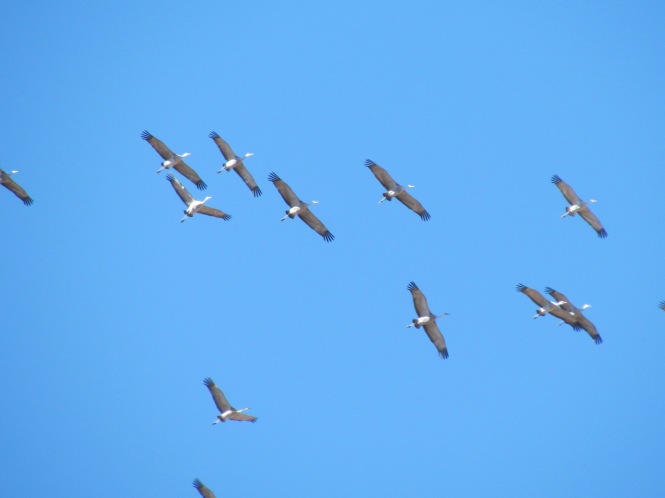 By all accounts, the migrants stop over at the Monte Vista National Wildlife Refuge between the middle of February and April. As I approached Monte Vista on Colorado Highway 160 in early April, about three weeks later than during my previous trips, I knew that I was pushing my luck. I noticed several smoke-like puffs in an otherwise blue sky, a sure signs of a flotilla of cranes. The thought crossed my mind that these might be the last ones leaving for their breeding grounds in northern latitudes. My fear worsened when I saw no cranes along the 2.5 mile auto-loop inside the refuge, and nearby pull-outs, but was assuaged when their characteristic laryngeal trill reached my ears, and I beheld a few dozen circling in the sky. After a survey of their previous roosting site revealed not a single representative, neither in the evening, nor on the following morning, I knew I had come too late to witness their multitude. Apart from occasional small flocks of cranes riding the thermals, I only detected a few lone individuals in a field. Alas, even those were too distant to capture crisply on camera. Somehow, even though these long-legged, long-billed, legendary birds, whose fossil records date back at least 2.5 million years, had been my primary purpose in returning to this part of our state, I was not overly dejected since I soon discovered other wonders to explore.

At first glance, the refuge appeared dormant this early in the season, dressed in muted yellows, browns and reds. Desiccated stalks of cattails and sagebrush, and leafless willow bushes and trees didn’t speak of spring, even though occasional green shoots in the marshes and ponds that make up a vast portion of the refuge whispered of flora’s springtime awakening. Not so the fauna, which was already wide-awake, and very audible. The part- and full-time denizens who call the refuge home were not deterred by the still chilly temperatures at night, which ranged from the teens to low thirties, or by the absence of floral lushness, and their sheer numbers and exuberance more than compensated for any sense of loss I felt at having arrived too late for the cranes’ migration. A herd of deer ranged among the sagebrush at dusk and dawn, chipmunks scurried from one cover to the next, and a few rabbits bounded through the brush. A sleek and striking Long-tailed Weasel was so intent on capturing a chipmunk that it ignored my proximity. Sadly for the chipmunk, the weasel succeeded. 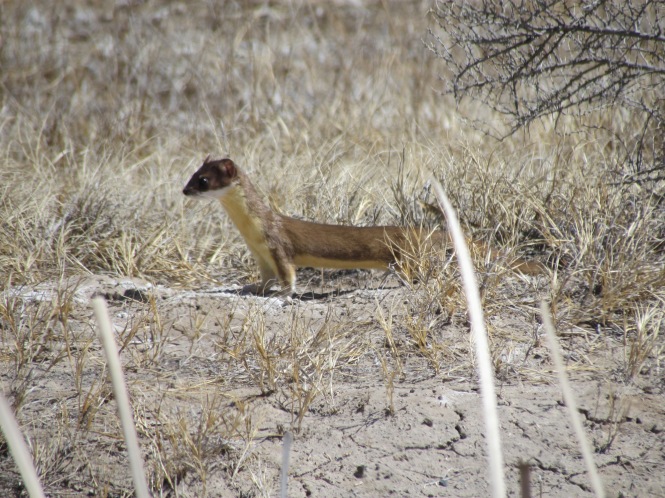 Other fascinating animals notwithstanding, I dedicated most of my time to the observation of feathered beings. Among the most numerous were Red-winged Blackbirds, well known to me from my home along Colorado’s Front Range. They were as flashy as ever, but were outdone, if not in number, at least in appearance, and whimsical behavior, by their cousins, Yellow-headed Blackbirds. The males’ conspicuous yellow heads, black bodies and white wing patches stood out among the cattails. Gregarious and garrulous, their blaring and surprisingly varied vocalizations are accompanied by hilarious contortions of the entire body. I named them clowns of the marsh, and they rank high on my list of favorite avians.

The blackbirds’ boisterousness was exceeded only by Canada Geese who seemed in a cantankerous mood, defending their chosen nesting sites noisily, and, at times, physically, from perceived or actual intruders. I had never before noticed the expressiveness of the ubiquitous American Coots. Genetically, they are nearer to Sandhill Cranes, than to the flocks of ducks with whom they share habitat and whom they resemble more closely, even though they conjure images of swimming chickens. The copious waterfowl included Mallards, Ring-necked Ducks, Ruddy Ducks, Northern Pintails, American Wigeons, Lesser Scaups, Redheads, Cinnamon Teals, and Buffleheads, and whatever else I might have missed. Among the shorebirds, the shrill call of Killdeer attracted attention, as did a special activity of American Avocets, namely leap-frogging, or, in their case, leap-avoceting, which looks as funny as it sounds. Diminutive Marsh Wrens went about their business among the cattails busily and vociferously, possibly building nests. Song Sparrows flitted along the marsh edges and delighted with their cheerful songs. Horned Owls broadcast their hoots in the morning and evening, Northern harriers and Red-tailed Hawks were engaged in hunting during the day. In the graying light following sunset, a Short-eared Owl alighted on a post to survey its surroundings for a bite to eat. 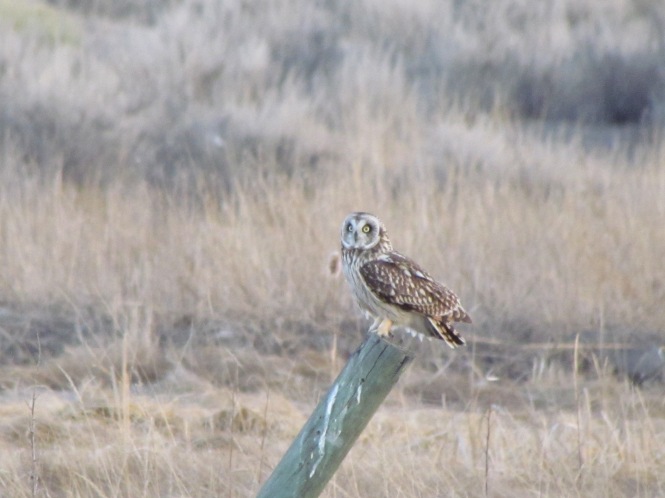 Above this near-constant background of sounds and commotion, I was still able to discern one of my favorite chants—the heart-warming melody of the Western Meadowlark.

I am no longer disappointed about the paucity of cranes at Monte Vista as it freed me to focus on details which might otherwise have escaped me. The wildlife refuge was teeming with a beautiful array of creatures with whom I shared a few precious days, and even though I didn’t find what I came looking for, I discovered so much more.