It has been said that a year would not suffice were a pilgrim to the Holy City to seek out one church daily, and I for one believe it. Two greeted me in the vicinity of the main train station immediately upon my arrival, and I was never far from one throughout my stay. During the few days at my disposal, I dedicated one to St. Peter and the Vatican, but at least one more ecclesiastical edifice piqued my interest: Santa Maria della Vittoria, home of “The Ecstasy of Saint Teresa”, a sculpture by the seventeenth century Italian artist Gian Lorenzo Bernini (1598-1680). Though I am no connoisseur of Catholic Saints, or of Baroque art, a likeness of the monument features prominently in a spellbinding contemporary novel, Cutting for Stone, by Dr. Abraham Verghese, and after my literary acquaintance, I was determined to encounter it “in the stone”.

The church’s impressive but understated earth-tone external façade did not prepare me for its opulent interior.

Sumptuous paintings, ornate marble columns, and stucco angels occupied the sacred sphere, but despite their brilliance, my eyes did not rest on them long, and were drawn to one the side chapels. There, in a world of marble, the life-size luminous figures of Teresa and an angel float on a cloud, surrounded by a shrine illuminated by a circle of golden rays. The Saint is half-recumbent, her head extended, her eyes closed, and her face enraptured. The angel lifts her billowy dress and points an arrow at her heart.

The Ecstasy of St. Teresa

By her own report, Teresa had visions of being tormented by this angelic arrow whose flaming tip pierced her repeatedly, setting her on fire with a great love for God. The Carmelite nun who lived in Spain in the sixteenth century (1515-1582), was canonized by Pope Gregory XV in 1622, and the sculpture was completed by Bernini in 1652, in response to a commission by a Catholic Cardinal who desired it as the crowning jewel for his burial chapel.

I can’t judge whether Teresa’s ecstasy is carnal, rather than chaste, which seems to have been a perpetual debate since her creation, but this realistic and exquisite piece of art by Bernini aroused my curiosity about the artist. Not knowing much beyond his name before my sojourn in Rome, repeated references to him in my guide book attested to his pervasive influence throughout the city. Next to Teresa’s inspired rendering, he was instrumental in the redesign of St. Peter’s Basilica where he created the immense bronze baldachin covering St. Peter’s tomb, and later fashioned the semicircular colonnades that contribute to the beautiful symmetry of St. Peter’s Square. 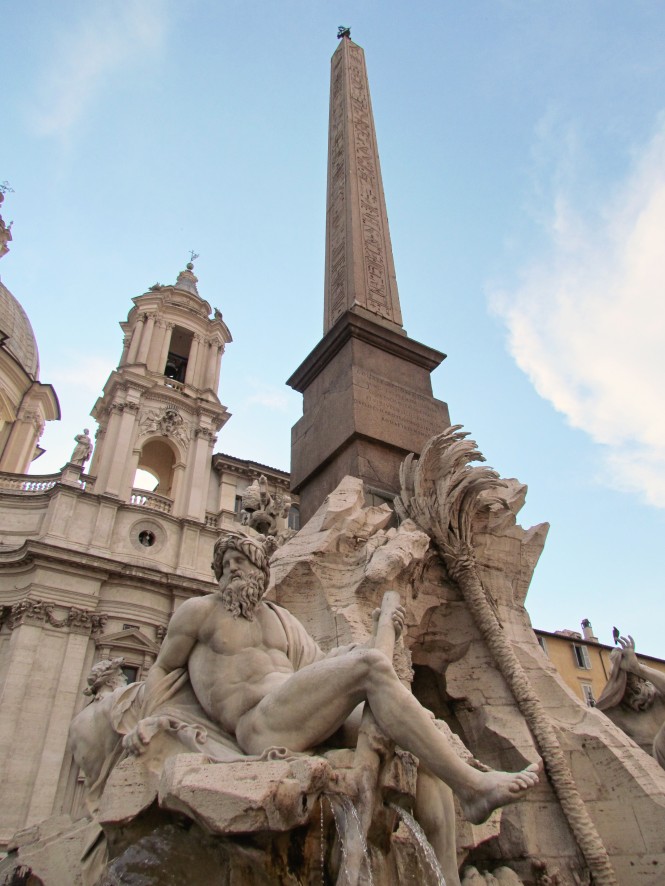 Fountain of the Four Rivers with the God representing the Ganges; the others show the Nile, the Danube, and the Rio de la Plata, each representing one of the four known continents of the era

Other masterpieces include the Fountain of the Four Rivers on The Piazza Navona, the Triton Fountain on the Piazza Barberini, and the whimsical Elephant with Obelisk on the Piazza della Minerva near the Pantheon, though the latter was likely completed by one of his students. Bernini, precocious artist extraordinaire, proved his special talent before the age of ten, and his mastery of sculpture and architecture proved as rich as his eighty-one years on earth, in the course of which eight successive popes employed his services.

During my all-too-brief stay in Italy’s capital, and my semi-accidental stumbling upon Bernini, I recalled a phrase attributed to Socrates: “I know that I know nothing”. I am reminded of this sensation daily, but traveling to new frontiers has a way of magnifying it. Rome was no exception, and it would take an eternity to explore all the city has to offer. For lack of this, I must content myself with the hope of an occasional visit, and prepare to be surprised each time.

One thought on “Scio me nihil scire”