At any new destination, I like to obtain a bird’s-eye view, if possible, and during my sojourn in Rome, the dome of St. Peter’s Basilica provides one such perch. This imposing landmark is visible from multiple vantage points throughout the city, and once inside the nave of the church, I feel dwarfed when glancing up at its height of nearly 450 feet. To reach the cupola, one has to mount 551 stairs, even though it is possible to bypass the initial 231 by taking an elevator. There is never any doubt in my mind that I will ascend all of them under my own power. With the ubiquity of high-carb foods in the country synonymous with pasta and pizza, burning off a few extra calories will make my next meal more pleasure-, and less guilt-laden. Only a few hours earlier, I saw a restaurant advertise “habemus pizza”. The allusion to “habemus papam”, the official declaration following the successful election of a new pontiff, made be both hungry, and laugh.

After the first set of steps, I enter a balcony at the base of the dome. 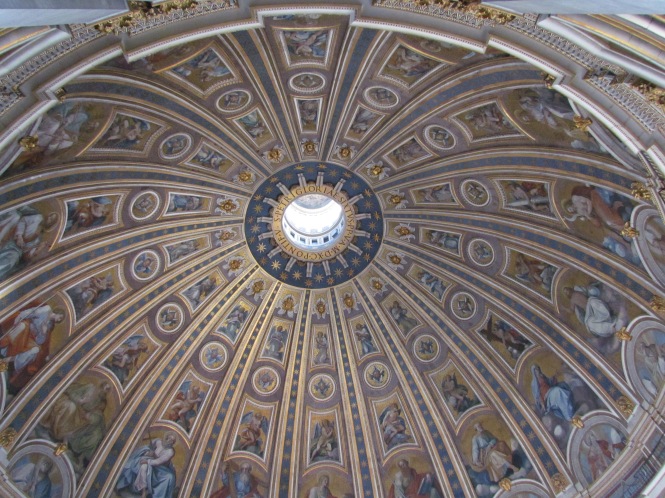 From the ground level, vertiginously distant from this altitude, I only saw its gilded surface, but from here I appreciate its artistic details, its frescoes, and angelic mosaics.

One of many mosaics at the base of the cupola

A circular inscription from the Gospel of St. Matthew below the balcony revolves around Saint Peter who was reportedly crucified where this temple of Catholicism is now located. “Tu es Petrus et super hanc petram aedificabo Ecclesiam meam et tibi dabo claves regni caelorum” translates as “You are Peter and on this rock I will build my church, and I will give you the keys to the kingdom of Heaven”.

The remaining 320 steps are enclosed in a narrowing spiral staircase which would be a nightmare in case of claustrophobia, from which I, thankfully, do not suffer. When I finally emerge into the open, Rome stretches out in all directions, surrounded by the hilly Campagna which adds a picturesque backdrop to the urban tapestry, under the canopy of a blue sky dappled with clouds. Closer at hand, the statues of Jesus and the Twelve Apostles lord over St. Peter’s Square from the rooftop of the basilica and seem to bless all of Rome, and the Tiber River, lifeblood of the city.

St. Peter’s Square and Tiber River, seen from the top of the dome

To the north and west the Vatican’s meticulously groomed and verdant gardens doubtlessly benefit from the river’s presence. Beyond the stream, the emblematic walls of the Colosseum invoke ancient Rome’s might and terror, as well as its architectural ingenuity, similar to the Pantheon, also in the line of sight. Both edifices have survived nearly two millennia and the cupola of the latter served as a model for Michelangelo’s dome which holds me up at present. His life from 1475 until 1564 fell into the period when the current basilica was erected, at the site of an older one, dating to the fourth century. I recall my woefully short hours at the Vatican Museums earlier in the day whose walls also enclose the paintings of the Sistine Chapel, arguably Michelangelo’s greatest creation. While I stood agape before his superb artistry not so many hours ago, little did I expect to experience elation again so soon, but it should not have come as a surprise. In this metropolis where one superlative supplants another, it seems improbable that this current pinnacle will be equaled, or even exceeded, but somehow I expect exactly that.

5 thoughts on “A View of Rome”