Were it not for visionaries like General William Jackson Palmer, the founder of Colorado Springs, who realized early in its history that precious land needed to be set aside to preserve and protect forever, it is unlikely that his generous gifts to the city which included North Cheyenne and Bear Creek Canyons, as well as Monument Valley and Palmer Parks, would have remained natural oases. 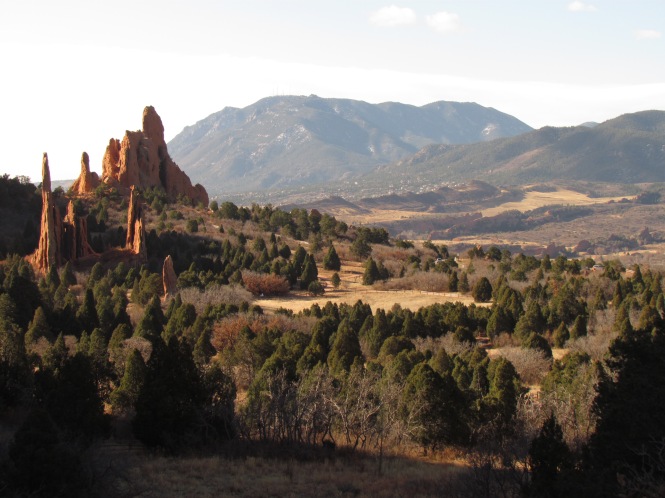 One such oasis, considered by many the crowning jewel in a collection of precious gems, is Garden of the Gods. Even though it was not donated to the city by its founder, the General still deserves indirect credit. He convinced one of his friends and fellow railway aficionados, Charles Perkins, president of the Burlington Railroad, to purchase the land with the spectacular sandstone formations. Mr. Perkins opened it to the public during his lifetime, and after his death his children honored his wish and bequeathed it to the city, to “be kept forever free to the public”, as a large plaque at North Gateway Rock in his honor attests. 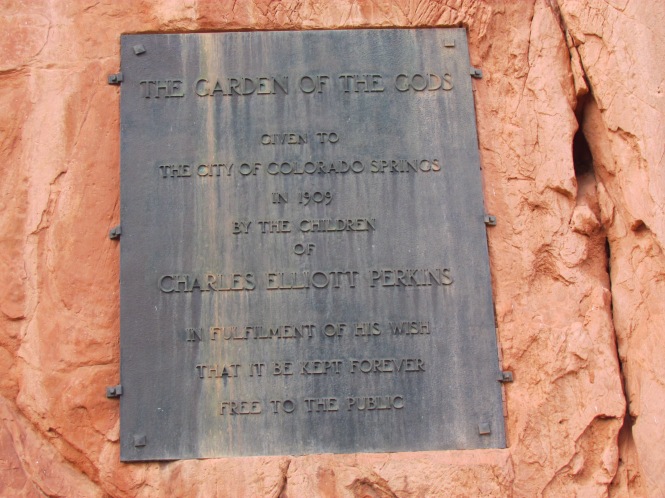 For residents and tourists alike, it is one of our main attractions, though as a local lover of this curvilinear array of iconic rock, I derive the greatest pleasure by visiting early in the morning, and by avoiding weekends altogether. A dearth of parking spaces and bumper-to-bumper traffic can lessen one’s enjoyment significantly. I am glad to have participated in a few interesting and informative events there this summer, but they reinforced my need for solitude.

In May, I signed up for a guided hike during the 2nd annual Pikes Peak Birding and Nature Festival. While watching the sunset with its attendant play of shadows in the Central Garden, and listening to the descending tune of Canyon Wrens, a pair of nesting Prairie Falcons was busily hunting. Myriad circling and screeching White-throated Swifts made use of the last vestiges of daylight. Their annual migration to and high numbers in the park were among the arguments resulting in its designation of National Natural Landmark in 1971, one of 13 in Colorado.

My husband and I attended one of the weekly bat tours in June. Led by a very knowledgeable volunteer, it started with a brief lecture at the Visitor Center. We learned that out of Colorado’s 20 bat species, three oversummer in local stony clefts and crevices, the Little Brown, Big Brown, and Pallid Bats. Interestingly, only the males travel here, leaving the females behind in New Mexico, to tend to the raising of their offspring. Near a cliff wall at nightfall, we witnessed their emergence from their daytime hangouts. Before the nocturnal hunt for insects, they quench their thirst from a pond at nearby Rock Ledge Ranch. Hand-held echolocators enabled us to hear their species-specific signals with which they navigate. Expecting the bats’ crepuscular flight, a pair of Great Horned Owls was occupying real estate in the vicinity where we made out their silhouettes against the darkening sky.

One July day, I participated in a guided walking tour. It focused on the geologic processes of sand deposition and subsequent tectonic uplift responsible for the area’s vertical slabs, but as intriguing as these scientific explanations are, they pale before the rubicund beauty of this enchanting destination at the foot of Pikes Peak. 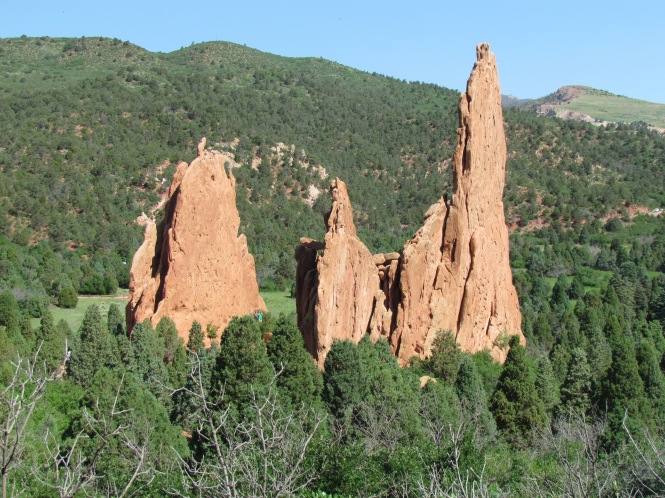 Diverse groups of people have traversed this land throughout the ages, American Indians being the first. Even though no written records exist of their experiences, we know from their interactions with the early newcomers, that they considered this a special, if not a sacred spot. Each successive wave of passersby has felt a similar sense of wonder, reflected correspondingly in the Garden’s name, and no matter how often I am there, I am overcome with the same, abiding sense of awe.

3 thoughts on “The Enchanted Garden”