Among my favorite rodents are Golden-mantled Ground Squirrels, previously highlighted in at least two posts (see here and here). Native to the American West, they reside mainly in coniferous and mixed forests, but may occupy habitat ranging from sagebrush country to areas above timberline, and are, therefore, frequently seen. As I have to resist the impulse to take one home with me, I comfort myself by taking too many pictures of these extremely photogenic creatures whenever the occasion arises. It did during a recent camping trip not too far from Colorado Springs, when I had two memorable chance meetings of the charming and cuddly kind.

In the first, I made the acquaintance of Peekaboo. As I was taking a stroll through the forest, I watched one squirrel disappear into a burrow. Stopping in my tracks for several minutes, my hopes for its reappearance were not disappointed. Very slowly, inch by inch, it showed itself: nose first, followed by ears and front paws, until it emerged in its entire elegance. 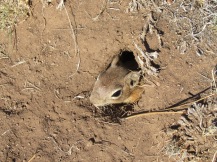 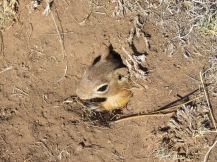 The next fellow’s name undoubtedly was Feed Me. When it showed up ON my picnic table at my campsite while I was enjoying a snack, I knew I was in trouble. I don’t usually feed wildlife, other than birds in our back yard (which invariably means that some neighborhood rabbits, raccoons, squirrels, and skunks benefit from the seeds that drop to the ground). When stared at intently by a pair of beautifully shaped and outlined eyes, is it any crime that my usually adamant stance first weakened, then collapsed?

I quickly resolved that a carrot stick would not be detrimental to an animal likely exposed to junk food at the campground most of the time; rather, it might even counteract some of the ill effects of such a diet. So I tossed one in its direction, and witnessed how Feed Me whittled it down by daintily holding and rotating it with its front paws. As I kept watching, photographing, and grinning, I rationalized that my provitamin A donation contributed to the ocular health of at least one of these cuties whose gaze melts my heart each time. 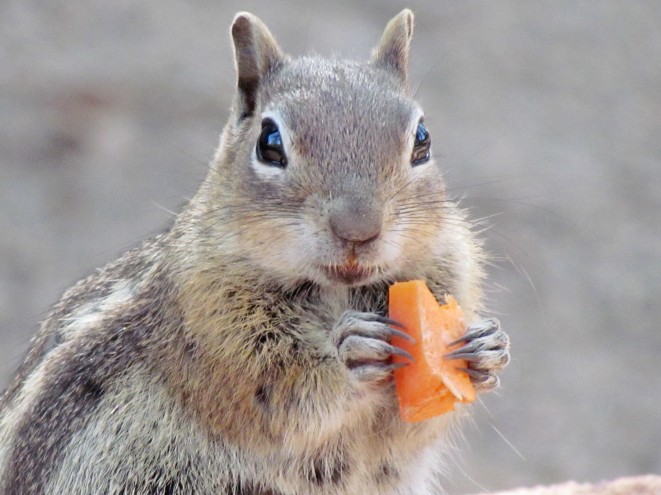