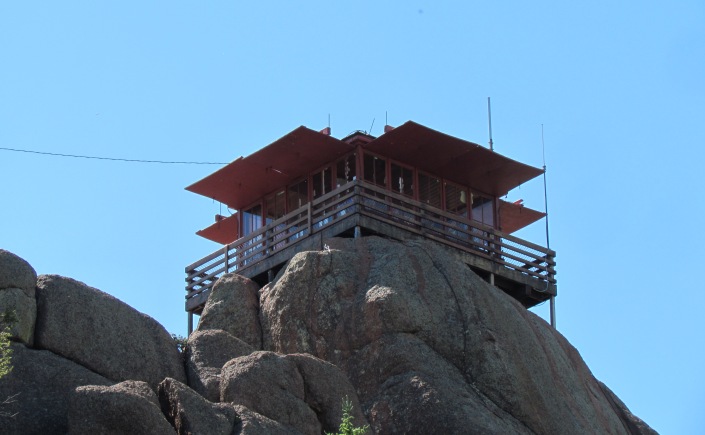 If my office sat atop a 9,748 foot rocky perch and offered panoramic views of Colorado’s mountains and plains, I, too, would happily climb 143 steep steps each morning to get to work. I would not frown upon the employer-provided domicile, or upon having to use an outhouse. Rather, I would relish residing remotely each summer, 1.5 miles from, and 939 feet above, the nearest trailhead.

Unfortunately, this lofty office, built in 1951, whose elevated raison d’etre is the early detection of wildfires, does not have any openings, as the role of fire lookout has been filled by the same person since 1984. Mr. Bill Ellis, a U. S. Forest Service employee, was in his mid-50s when he jumped at the chance to take on the full-time seasonal position, moving to the cabin with his wife and, to begin with, their four children, each fire season, with the exception of only a few years. In his mid 80s now, he has become a living legend. His is a dying profession, because modern fire monitoring technologies are supplanting the human eye.

As residents of Colorado Springs, we enjoy occasional newspaper articles about the renowned fire tower lookout at Devil’s Head, a rocky promontory reportedly resembling Satan’s noggin from a few vantage points. This destination had long lingered and languished on our wish list until late June, when we finally saw it for ourselves. Though located less than 45 miles from the city as the crow flies, the trailhead lies off the rough and gravelly Rampart Range Road, and it took us nearly two hours to drive there. Out-of-the-way as it might be, its popularity has been growing exponentially, in lockstep with Colorado’s population, and the parking lot, albeit not full, contained many vehicles on the morning of our weekday visit. 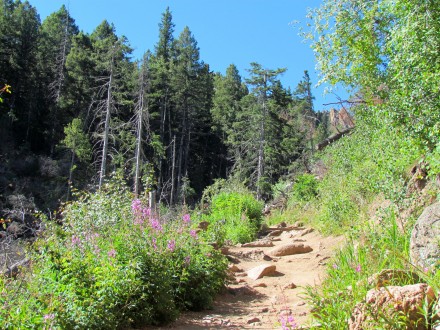 Fireweed along the trail 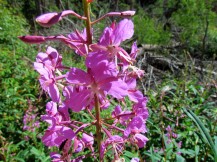 The 1.5 mile, tree-lined, narrow footpath sparkled with wildflowers, glittered with butterflies partaking of their sweet nectar, and resounded with birdsong, the melancholy tune of the Hermit Thrush audible above other voices. When we reached the flat area where Douglas Fir spread their verdant boughs over the couple’s home benignantly, we did not see the second famous local resident, Mrs. Margaret Ellis, but the towels drying on a clothesline in our low-humidity air bespoke her presence. 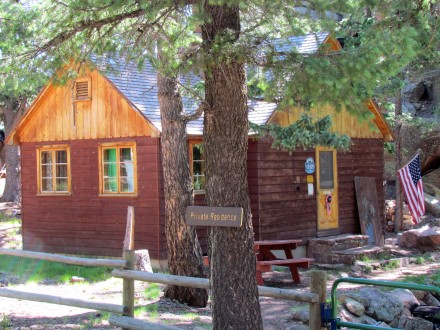 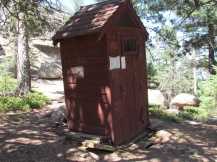 Huffing and puffing up 143 stairs rewarded us with 360 degree views from the tower, balanced like a raptor’s nest on the uppermost point. Its door was wide open, and inside the well-known lookout, binoculars at the ready, went about his business – the early espying of anything that resembles flickering flames or spiraling smoke, in order to activate a network of firefighters intent on preventing a potentially disastrous spread in our region suffering from a near decade-long drought. Despite an almost constant trickle of hikers, whose numbers approximate 40,000 annually, he greeted each party individually, and seemed more than willing to answer questions, and to pose for a photo. 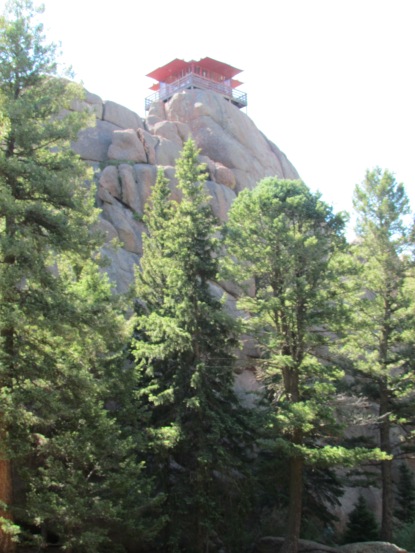 Stairs to the tower 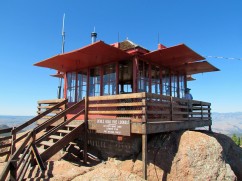 I never tire of elevated places and bird’s eye views and suspect Mr. Ellis shares this sentiment. Despite the physical challenges of living at high altitude, off the grid, and without indoor plumbing for months at a time, and despite the daily demanding trek to his high post, he seemed completely in his element. May his quiet dignity and competence continue to be part of our local landscape and lore for as long as befits him and his wife, and may their future paths be smooth, sunny, and smoke-free.

Hazy view of Pikes Peak in the south

Hazy view of the eastern foothills and plains

Hazy view of the western mountains

35 thoughts on “A Fire Lookout”