As a European transplant to America, I am often asked if I miss my native country. First and foremost, I miss my Dad, his significant other, the rest of my family, and my friends. Staying connected via the Internet or the occasional phone call can, in no way, replace cherished face-to-face time, which happens all too seldom, but at least a connection remains. This was commonly not the case for earlier emigrants who, once they stepped on board the ship that would steam across the Atlantic, were never heard of again. Furthermore, I miss certain places and traditions that have imprinted themselves on my psyche and are associated with an aching sense of nostalgia.

On a lighter note, when we met, my future husband used to tease me about not really being German by birth, as I neither ate meat, nor drank beer, wine, or coffee. He always claimed that I must have been an import. So when American friends wax lyrical about German cuisine and German hops, I can only roll my eyes. I no longer yearn for the typical meals of my childhood, centered around a slab of meat, accompanied by a potato variation, and served with an overcooked, tasteless vegetable slathered in a Fondor-based white sauce (my apologies to all lovers of said dishes).

What I long for instead is German bread. Oval, round, square, or rectangular loaves (not to forget Brötchen). Baked with wheat, buckwheat, rye, barley, spelt, or oat flower. Topped or filled with sunflower, pumpkin, millet, poppy, or flax seeds. With a crunchy crust and a firm yet fluffy core that can neither be lumped into a ball, nor tastes of molasses, or some other sweetener (my apologies to all lovers of American bread). If this sounds like a nightmare for sufferers of gluten-sensitivity, it is a dream for someone who will never embrace a low-carb diet.

Given this somewhat lengthy introduction, it is perhaps relatable that one of my first errands upon my arrival in Frankfurt is a detour to one of the various airport bakeries, followed by many similar errands to similar establishments throughout my sojourn in Germany, be they venerable old-time, locally-owned businesses (those are the best!), supermarket-affiliated chains, or pretzel kiosks at train stations, or in downtown pedestrian zones.

The inimitable, irresistible aroma of freshly baked goods wafting out of a bakery, and the sight of shelves weighed down with myriad shapes and sizes and shades of bread are, for me, the surest signs that I am back in the old country. 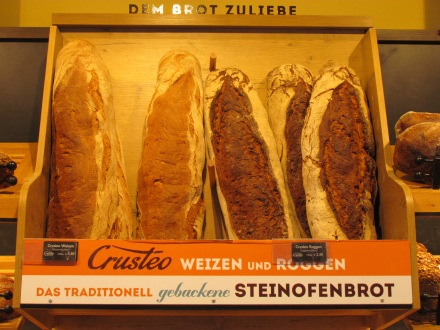 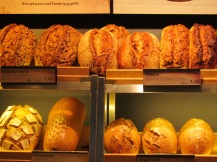 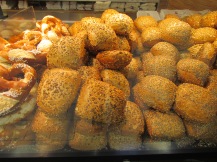 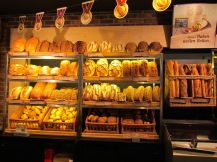 Alas, at present, I have to content myself with visual, olfactory, and gustatory fantasies, until our travel plans come to fruition.

57 thoughts on “Germany’s Greatest Gift To The World”