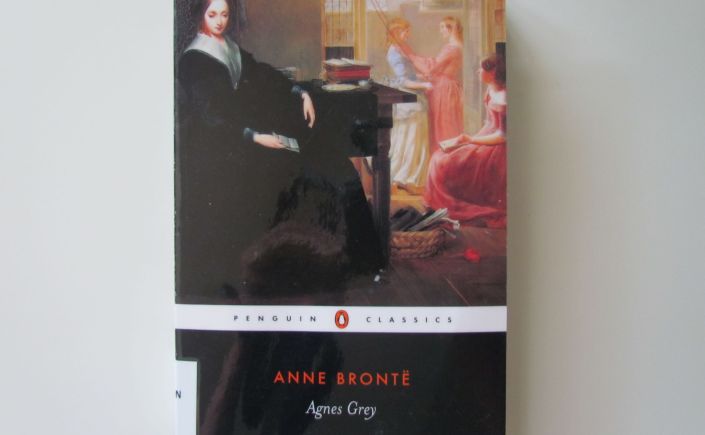 After reading Charlotte Brontë’s Jane Eyre and Emily Brontë’s Wuthering Heights in English for the first time last year, I recently immersed myself in Anne Brontë’s Agnes Grey, a highly autobiographical novel. Like many women in 19th century England who had to work for a living, all three Brontë sisters became governesses, one of the few accepted professions in educated circles. Despite this “acceptance”, they were neither treated nor paid well by their employers, nor granted any true authority to discipline the rich, pampered, and frequently unmanageable children.

When Agnes Grey, the novel’s eponymous protagonist, seeks to support her family financially by becoming a governess, she experiences this first-hand. Her first position is short-lived, because the overindulgent parents can find no fault with their offspring, and instead blame Anne for their disobedience. Her second employment lasts several years, but proves only marginally more satisfying. When her charges reach a marriageable age, her services are no longer required. She returns home to assist her mother in founding and administering a private school, following her father’s death (running their own school had also been the Brontës’ unfulfilled wish).

After years of unappreciated dedication and countless deprivations, Agnes finds true love when Mr. Weston, the curate of her former parish to whom she had lost her heart, seeks her out and proposes, in these words, “ ‘My house is desolate yet, Miss Grey,’ he smilingly observed, ‘ and I am acquainted now with all the ladies in my parish, and several in this town, too; and many others I know by sight and by report; but not one of them will suit me for a companion…in fact, there is only one person in the world that will; and that is yourself; and I want to know your decision?’ ” The Hollywood-style ending of Agnes Grey deviates from Anne’s sad story, but knowing about the Brontës’ fate, I cheered for that ending, wishing for Agnes what was denied to Anne.

The Brontës’ biography reads like a tragedy and fascinates generation after generation. It is a tragedy linked to one of mankind’s oldest stalkers, consumption, or tuberculosis, in modern parlance. Between 1814 and 1820, the Reverend Patrick Brontë and his wife Maria brought six children into the world. In the next year, the family became motherless, when Maria died of an ill-defined malady. In 1825, two of the daughters, Maria and Elizabeth, died of consumption at the ages of 11 and 10, respectively, likely brought on by wretched living conditions at their boarding school. Four children lived to adulthood, but not to old age. In 1848, the lone boy, Branwell, died at 31, ravaged by consumption and years of alcohol and opium addiction. Three months following his funeral, 30 year-old Emily joined him in the grave. Only one month after the dreaded disease claimed the life of her favorite sister, Anne, too, succumbed to it, 29 years young. Charlotte Brontë survived to the comparatively advanced age of 38, supposedly dying from consumption, but possibly from other causes, while pregnant with her first child. The patriarch, Patrick Brontë, despite lifelong physical ailments, outlived Charlotte by six more years, passing in 1861 at the age of 84.

We often think of the Brontës as a trio, with Charlotte playing first violin, Emily second, and Anne third. While Anne, as the youngest sibling, might have been eclipsed by her older sisters, she, too, left a legacy that allows glimpses into her soul. She had the satisfaction to see two novels published during her lifetime. I found Agnes Grey eminently readable, and look forward to The Tenant of Wildfell Hall which became a huge success, but was also hugely controversial. This later story about a battered wife who leaves her abusive husband with her son proves that Anne was a woman with her own opinions who addressed uncomfortable societal realities and whose quiet and self-effacing character might have been at least a partial posthumous fabrication by Charlotte. May Anne’s words speak for her.